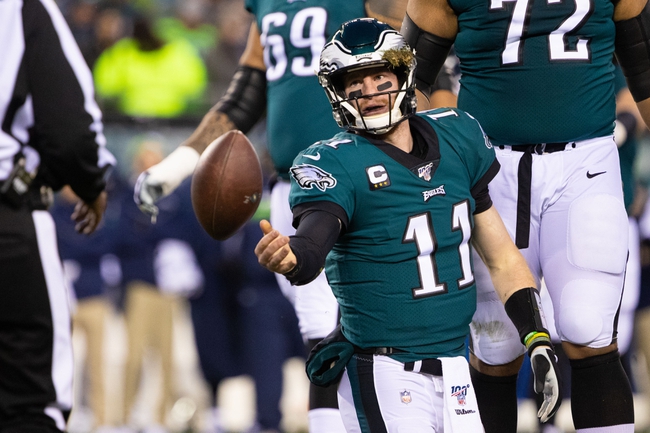 The Philadelphia Eagles and the Kansas City Chiefs meet in a Madden 20 NFL simulation game on Tuesday night.

The Philadelphia Eagles come into this game looking to build on a decent showing in the Sim Classic, finishing 3-0 in the group stage but losing in the quarterfinals to the New Orleans Saints. Zach Ertz leads the Eagles on offense with a 90 overall rating with 87 acceleration and 93 catching while Alshon Jeffery and DeSean Jackson make up the Eagles’ top receiver pairing at 85 and 84 overall respectively. Carson Wentz is starting quarterback for Philly at 83 overall while the Eagles’ top rated players are on the right side of their offensive line with Jason Kelce at center with a 94 overall rating, Brandon Brooks at 93 overall at right guard and right tackle Lane Johnson at 89 overall. On the defense, Fletcher Cox leads the Eagles at 95 overall with 95 strength, 93 tackling and 96 power move while Brandon Graham is right defensive end at 87 overall with 90 power move and 93 impact blocking. Malcolm Jenkins leads the Eagles’ secondary at 86 overall with 91 acceleration, 90 agility and 88 zone coverage.

The Kansas City Chiefs will also be trying to build off of a solid Sim Classic appearance, going 2-1 in group play but falling to the eventual champion New England Patriots in the quarterfinals. Patrick Mahomes comes into this one as one of the game’s five highly-touted players with a 99 overall rating, with 96 throwing power as well as 97 short pass accuracy, 95 medium pass accuracy and 93 deep pass accuracy. Tyreek Hill isn’t far off of the pace at the top of the list at 96 overall, with a 91 attribute rating in catching along with 97 juke, 99 speed, 99 acceleration and 98 agility while Travis Kelce is also at 96 overall as Kansas City’s top TEwith attributes of 99 awareness, 85 speed. 91 catching in traffic and 91 catching overall. On the defense, Chris Jones and Tyrann Mathieu share the team-high rank on the Chiefs with Jones leading the pass rush at 92 overall with 91 strength, 90 tackling, 89 finesse move and 95 power move while Mathieu anchors KC’s secondary at 92 overall with a 90 man coverage rating as well as 89 in zone coverage while also being rated at 90 speed, and 92 in acceleration and 92 agility.

This is a hard one to call as KC has the better offense and can put points up, but the defense is porous at times and can give up 30-40 points in any given simulation. On the other side, Philadelphia has some solid offensive performances, but do they have the horses to hang with the Chiefs on offense? Instead of trying to pick a side, I’m going to side with the over as I still have no faith in KC’s defense but I expect the Chiefs to score quite a bit as well.