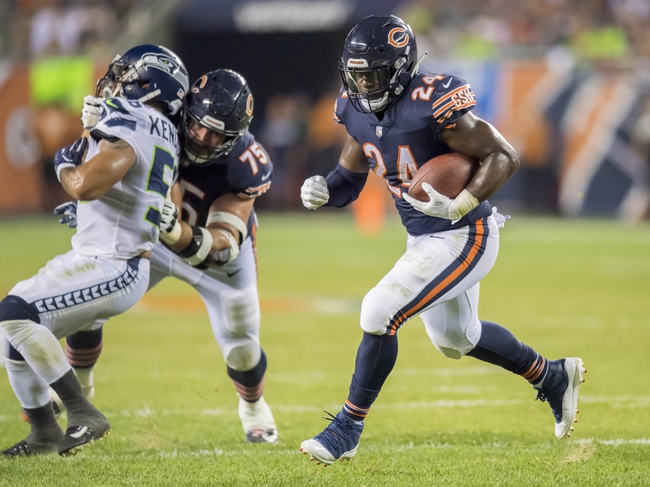 The Chicago Bears and the Seattle Seahawks meet in a Madden 20 NFL simulation game on Tuesday night.

The Chicago Bears will look to build on a decent showing in their first Sim Classic game, winning 17-12 against the Tennessee Titans last time out. Allen Robinson II leads the Bears on the offensive end with an 89 overall rating with 90 speed and 93 acceleration as well as 96 catching while Trey Burton is at 82 overall at tight end and Taylor Gabriel is an 81 overall rated wide receiver. Tarik Cohen leads the Bears’ backfield at 78 overall while Mitch Trubisky is still Chicago’s starting QB at 73 overall. On defense, Khalil Mack leads Chicago with a solid 98 overall rating, with 87 speed and 89 acceleration along with 94 tackling, 90 impact blocking, 91 block shedding, 91 finesse move and 95 power move. Eddie Jackson is rated 89 overall at free safety with a 94 grade in zone coverage and 90 acceleration while Kyle Fuller has 92 speed and acceleration at cornerback with 91 zone coverage and Akiem Hicks is at 88 overall at left defensive end with 91 block shedding and 89 power move.

The Seattle Seahawks will look to build on a solid showing in the Sim Classic, posting a 2-1 record and winning a knockout round game before losing to New Orleans in the conference semifinals. Russell Wilson leads the Seahawks’ offense with a solid 97 overall rating with 86 speed, 90 acceleration and 93 agility as well as 91 throwing power and 93 short pass accuracy, 94 medium pass accuracy and 96 deep pass accuracy. Tyler Lockett is the top WR for Seattle with an 88 overall rating including 93 catching, 93 speed, 92 acceleration and 97 agility while Chris Carson also has an 86 rating at RBwith 88 speed, 89 acceleration and 91 stiff arm. On the defensive side, Bobby Wagner is the Seahawks’ leader with a 98 overall rating, with 96 tackling, 90 impact blocking, 98 power, as well as high-90s attribute ratings in pursuit and play recognition. Jadeveon Clowney is right behind on the d line at 88 overall with 95 pursuit, 91 play recognition, 87 speed and 90 acceleration.

I backed the Bears on Monday and it paid off, but the Bears continue to play in these low-scoring games and I’m not sure how many games they can continue to win in that style. Seattle has a smash-mouth defense in their own right and the Seahawks are just the better offensive team. I think Seattle’s more than capable of winning this one by a field goal, so I’ll lay the points with Seattle here.