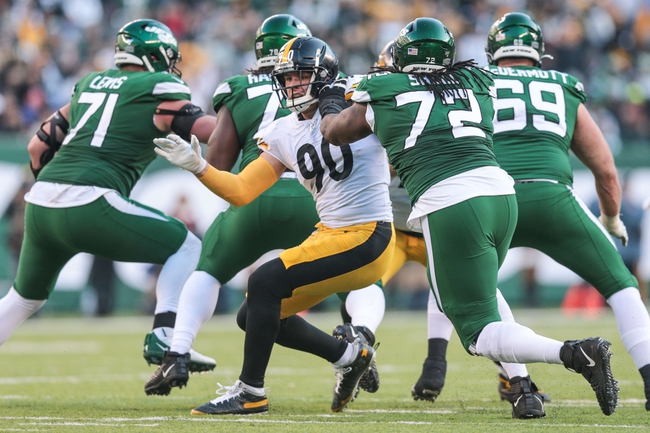 The Pittsburgh Steelers and the New York Jets meet in a Madden 20 NFL simulation game on Wednesday afternoon. Click Here to BET This NFL Sim Game

The Pittsburgh Steelers come into this game looking to build on a 40-33 win over New England in their last sim appearance. JuJu Smith-Schuster leads the Steelers on offense at wide receiver with an 86 overall rating, which includes a rating of 91 speed and 92 acceleration as well as 90 catching and 93 catching in traffic while James Conner is Pittsburgh’s lead running back with an 81 overall rating with 86 speed, 89 acceleration and 89 carrying. Ben Roethlisberger is the starting quarterback with an 81 overall rating with 89 throwing power and 89 short passing accuracy. On the defense, Cameron Heyward leads Pittsburgh rated at 90 overall with 93 strength, 91 tackling and 92 power move while Stephon Tuitt is on the other side of the front at 87 overall with 90 block shedding and 91 strength.

The New York Jets come into this game looking to build on a decent showing in the Sim Classic after a 2-1 record in the group stage but the Jets’ stay in the Sim Classic was short-lived as they were bounced by the Chargers in the conference quarterfinals. Le’Veon Bell leads New York on offense at 88 overall, including 89 speed, 92 acceleration and 95 agility as well as 88 carrying and 91 juke. Robby Anderson leads New York’s receiving group at 84 overall with 91 catching while Sam Darnold is 74 overall as New York’s starting quarterback. On the defense, Jamal Adams leads the Jets with a 92 overall rating, with 95 power and 92 zone coverage as well as 91 speed and 90 acceleration. The Jets also possess a pair of 85 overall rated middle linebackers in C.J. Mosley and Avery Williamson, with both possessing 89 acceleration and Mosley having 91 tackling while Williamson has 86 block shedding.

The points with the Jets are tempting, but the Steelers have been a lot more consistent offensively, and I’m just not sure how much I truly trust the Jets against that, even at home. I think the Steelers are more than capable of winning this one by a touchdown, so I’ll lay the points with Pittsburgh here. Click Here to BET This NFL Sim Game