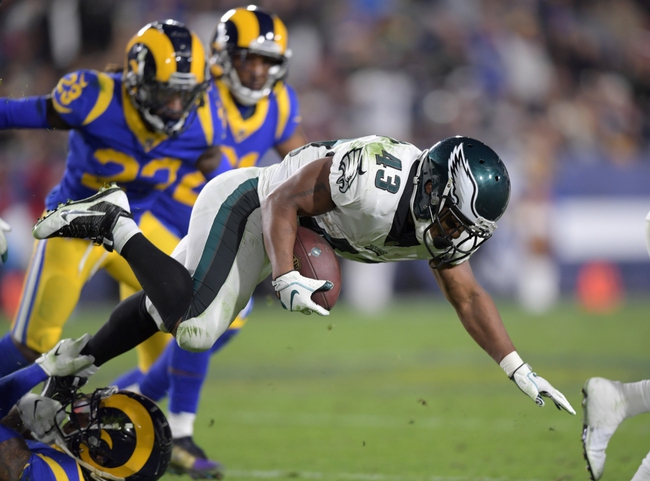 The Los Angeles Rams and the Philadelphia Eagles meet in a Madden 20 NFL simulation game on Wednesday night. Click Here to BET This NFL Sim Game

The Los Angeles Rams will look to bounce back from a winless showing at the Sim Classic after going 0-3 with a -41 point difference. Cooper Kupp leads the Rams’ offense and receiving group with an 87 overall rating with 94 agility and 95 catching while Robert Woods is not far off of the pace at the top with an 86 overall rating including 94 catching and Brandin Cooks follows at 85 overall with 95 speed, 92 acceleration and 95 agility. Todd Gurley II leads the Rams’ ground attack at 86 overall with 91 speed and 91 acceleration as well as 95 agility and 89 carrying. On defense, Aaron Donald is one of the game’s five highly-touted 99 overall rated players with 90 acceleration, 99 power move, 96 finesse move, 97 block shedding, 93 impact blocking and 92 tackling. Jalen Ramsey leads the Rams’ secondary at 94 overall with 95 man coverage and 95 zone coverage with 92 speed, 93 acceleration and 90 agility.

The Philadelphia Eagles come into this one looking to rebound from a 44-41 loss to Kansas City last time out. Zach Ertz leads Philadelphia on offense with a 90 overall rating with 87 acceleration and 93 catching while Alshon Jeffery and DeSean Jackson make up the Eagles’ top receiver pair at 85 and 84 overall respectively. Carson Wentz is starting QB for Philly at 83 overall while the Eagles’ top rated players are on the right side of their offensive line with Jason Kelce at center with a 94 overall rating, Brandon Brooks at 93 overall at right guard and right tackle Lane Johnson at 89 overall. On the defense, Fletcher Cox leads the Eagles at 95 overall with 95 strength, 93 tackling and 96 power move while Brandon Graham is right defensive end at 87 overall with 90 power move and 93 impact blocking. Malcolm Jenkins leads the Eagles’ secondary at 86 overall with 91 acceleration, 90 agility and 88 zone coverage.

The points with the Rams are tempting as I feel that L.A. is a better team than how we’ve seen them perform in these sim games, and they should be playing like their ratings, but for some reason they just aren’t. Philadelphia had a decent showing in the Sim Classic and took it to the Chiefs but couldn’t get the job done. Ultimately, the Eagles are just easier for me to trust, so I’ll lay the points with Philadelphia here.Click Here to BET This NFL Sim Game