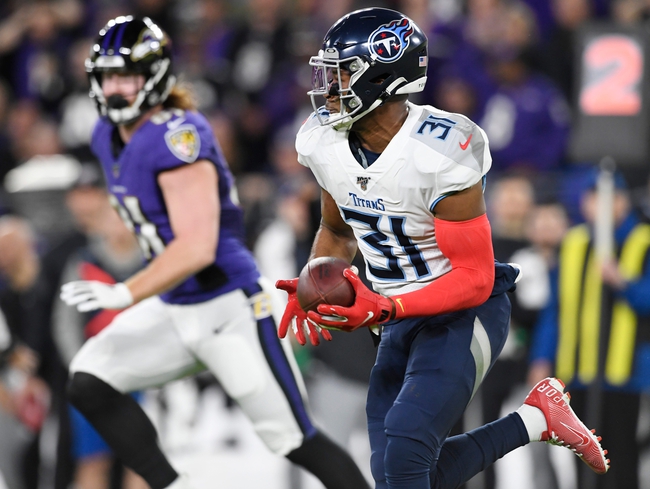 The Tennessee Titans and the San Francisco 49ers meet in a Madden 20 NFL simulation game on Thursday afternoon.

The Tennessee Titans come into this one looking to bounce back after a 27-24 loss to the Chicago Bears in their last sim appearance. Derrick Henry leads the Titans with a 91 overall rating with 91 speed, 87 strength, 91 carrying and 98 stiff arm while Delanie Walker comes up at 86 overall as Tennessee’s top tight end with 86 catching. A.J. Brown and Corey Davis make up the pairing at WR, rated just 80 and 79 overall respectively, while Ryan Tannehill comes in at 80 overall at starting QB for the Titans. On defense, Kevin Byard shares the team-high rating on the defensive end at 91 overall with 93 zone coverage and 90 speed while Logan Ryan is at 86 overall at cornerback with 87 speed, 91 acceleration and 90 agility with 92 play recognition. Jurrell Casey also checks in at 85 overall at right defensive end with 92 play recognition, 89 tackling and 89 impact blocking as well as 92 strength.

The San Francisco 49ers come into this game looking to build off of a strong showing in the Sim Classic where the Niners lost in the conference championship but still prevailed in the 3rd place game, defeating the Chargers 34-27. George Kittle leads the offense for the 49ers as a 97 overall rated TE with 98 catching while Emmanuel Sanders comes in as the top wideout for San Fran at 89 overall with 94 catching, 92 acceleration and 93 agility. Jimmy Garoppolo is starting QB for the 49ers at 84 overall while Tevin Coleman is right behind at RB at 82 overall with 93 speed, 92 acceleration and 93 agility. On the 49ers’ defensive unit, Richard Sherman leads the way at 94 overall at CB, with 99 awareness as well as 98 jumping, 90 man coverage and 99 zone coverage. Nick Bosa fronts the 49ers’ pass rush at 89 overall with 91 finesse move and 91 acceleration. The San Francisco defense also has four additional defenders with at least an 85 overall rating, including Arik Armstead, DeForest Buckner, Dee Ford and Fred Warner.

I said it against the Bears and it rang true, that I’m not a fan of the Titans as I don’t feel they have enough offensively outside of Henry and maybe Delanie Walker to win these sim games and the defense can’t do everything. San Francisco remains one of the best teams in the game and I think they’re more than capable of winning this one by a touchdown so I’ll lay the points with San Francisco in this one.