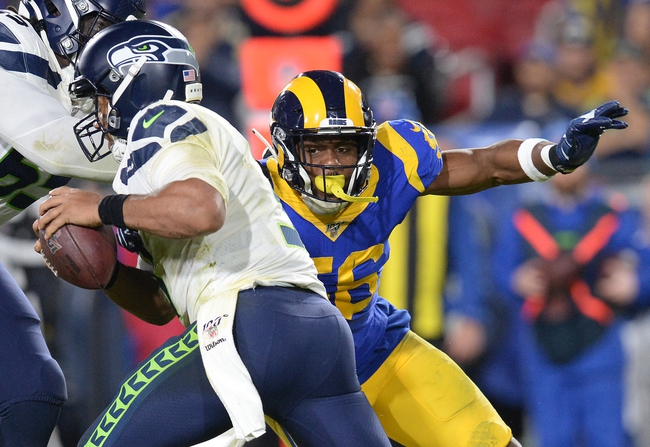 The Los Angeles Rams and the Seattle Seahawks meet in a Madden 20 NFL simulation game on Thursday night.

The Los Angeles Rams will look to bounce back after suffering a 23-10 loss to Philadelphia in their last sim appearance. Cooper Kupp leads the Rams’ offense and receiving group with an 87 overall rating with 94 agility and 95 catching while Robert Woods is not far off of the pace with an 86 overall rating including 94 catching and Brandin Cooks follows at 85 overall with 95 speed, 92 acceleration and 95 agility. Todd Gurley II leads L.A.’s rushing attack at 86 overall with 91 speed and 91 acceleration as well as 95 agility and 89 carrying. On defense, Aaron Donald is one of the s five highly-touted 99 overall rated players with 90 acceleration, 99 power move, 96 finesse move, 97 block shedding, 93 impact blocking and 92 tackling. Jalen Ramsey leads the Rams’ secondary at 94 overall with 95 man coverage and 95 zone coverage with 92 speed, 93 acceleration and 90 agility.

The Seattle Seahawks will look to build on a 6-3 win over Chicago in their last game. Russell Wilson leads Seattle’s offense with a solid 97 overall rating with 86 speed, 90 acceleration and 93 agility as well as 91 throwing power and 93 short pass accuracy, 94 medium pass accuracy and 96 deep pass accuracy. Tyler Lockett is the top wideout for Seattle with an 88 overall rating including 93 catching, 93 speed, 92 acceleration and 97 agility while Chris Carson also has an 86 rating in leading Seattle’s backfield with 88 speed, 89 acceleration and 91 stiff arm. On the defensive end, Bobby Wagner is Seattle’s leading defender with a 98 overall rating, with 96 tackling, 90 impact blocking, 98 power, as well as high-90s attribute ratings in pursuit and play recognition. Jadeveon Clowney is right behind on the D-line at 88 overall with 95 pursuit, 91 play recognition, 87 speed and 90 acceleration.

I’ve said it before and my opinion hasn’t changed that just like reality, the Rams aren’t a team I’m trying to get behind as the results just haven’t been there despite having talented and high-rated players on their roster. Seattle had a defensive battle last time out, but I expect things to pick up a little bit here and Seattle wins and covers as well.