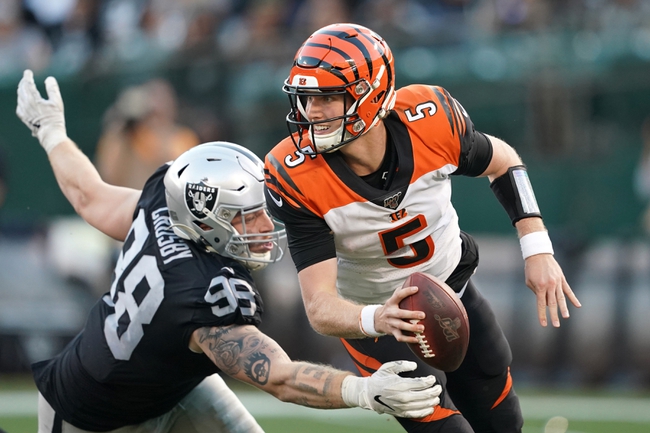 The Oakland Raiders and the Cincinnati Bengals meet in a Madden 20 NFL simulation game on Friday afternoon. Click Here to BET This NFL Sim Game

The Oakland Raiders will look to bounce back from a 44-34 loss to Dallas in their last outing. The Raiders’ greatest strength is their O-line with Rodney Hudson at 93 overall, Richie Incognito at 87 overall and Trent Brown at 86 overall. Josh Jacobs and Darren Waller each have 85 overall ratings, with Jacobs owning 96 carrying and 91 acceleration at RB while Waller has 89 speed, 89 acceleration and 96 catching at TE. Tyrell Williams is the Raiders’ top wideout at 82 overall with 92 speed, 93 acceleration and 95 agility while Derek Carr is still the Raiders’ starting QB with an 80 overall rating. On defense, Lamarcus Joyner comes in with an 83 overall rating, including 88 speed and 92 acceleration, but after Joyner, every defender on the Raiders owns a 79 overall rating or lower.

The Cincinnati Bengals will be on the hunt for their first sim win after a 40-7 beatdown loss to Green Bay in their last game. A.J. Green leads the Bengals with a 90 overall rating at receiver, with 90 speed and 92 agility with 92 catching and 96 marks in catching in traffic and spectacular catch. Joe Mixon starts at RB for Cincinnati with an 87 overall rating with 91 speed and 93 acceleration while Tyler Boyd is 83 overall at wide receiver. Andy Dalton is now a Cowboy, but in this game, he’s the starting at QB for the Bengals, but only has a 72 overall rating at the position. On the defensive end, Geno Atkins leads the Bengais’ front line at 88 overall with 90 strength, 89 impact blocking and 90 power moves. Carlos Dunlap is also at 82 overall on the defensive line while William Jackson leads the secondary at 81 overall.

You get the feeling that it’s just a matter of time before the Bengals actually pull out a win in one of these sim games, but until then, it’s a case of I’ll believe it when I see it. The Bengals have done nothing but get beat up on left and right. Oakland lost to Dallas, but the Raiders fought for a cover and still has a strong performance in the Sim Classic where each of their games was decided by a field goal. I’ll lay the points with Oakland here. Click Here to BET This NFL Sim Game