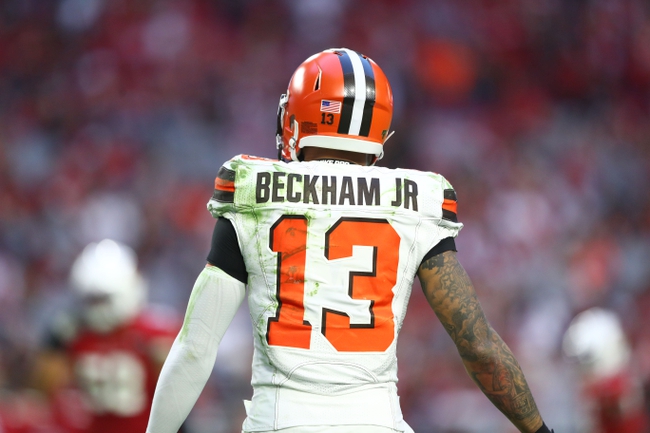 The Cleveland Browns and the Dallas Cowboys square off in a Madden 20 NFL simulation game on Friday afternoon. Click Here to BET This NFL Sim Game

The Cleveland Browns looking to rebound from a frustrating performance in the Sim Classic tournament where the Browns finished 1-2, missing out on the playoff rounds. Nick Chubb leads Cleveland on offense with a 92 overall rating, with 92 speed, 91 acceleration and 85 strength grades. Odell Beckham Jr. is the top wide receiver for the Browns, rated at 90 overall with a 99 rated spectacular catch as well as 91 in catching in traffic and a 98 mark in ball carrier vision while also having 94 ratings in speed and acceleration and 98 agility. Kareem Hunt is rated 88 overall at RB, with 90 speed and 92 acceleration and 92 agility along with a 98 carrying rating while Baker Mayfield is rated at 76 overall as Cleveland’s starting QB, including 93 throwing power, 87 short pass accuracy and 85 long ball accuracy. On the defensive side of the ball, Myles Garrett is the leader with a team-high 93 overall rating at defensive end, with 85 speed, 90 acceleration and 96 strength as well as a 95 power move rating.

The Dallas Cowboys will look to build off of a 44-34 win over the Raiders in their last sim appearance. Ezekiel Elliott leads Dallas on offense, rated 93 overall at running back with 90 speed, 91 acceleration and 95 agility while Amari Cooper leads the Cowboys’ receiving group at 91 overall with 92 speed, 96 agility and 89 catching. Dak Prescott has an 81 overall rating as starting QB with 87 throwing power and 88 short pass accuracy. The Cowboys also have some size on their offensive line, with Zack Martin sporting a team-high 97 overall rating while Tyron Smith is at left tackle at 91 overall. On the defensive end, Byron Jones and Demarcus Lawrence lead the Cowboys, both at 88 overall, with Lawrence owning a 93 finesse move rating, 89 power move and 88 block shedding rating while Jones has 92 speed, 94 acceleration and 96 agility to go along with an 84 man coverage rating and 90 zone coverage rating in the Cowboys’ secondary.

I think you could make a case for either side here, as both have had some dud performances and both are teams that the game absolutely loves for whatever reason in terms of ratings. Instead of trying to pick a side, I’ll side with the over. I wouldn’t be surprised if this one finished just shy of 60 points if not over 60, so I’ll take the over in what should be a high-scoring game. Click Here to BET This NFL Sim Game