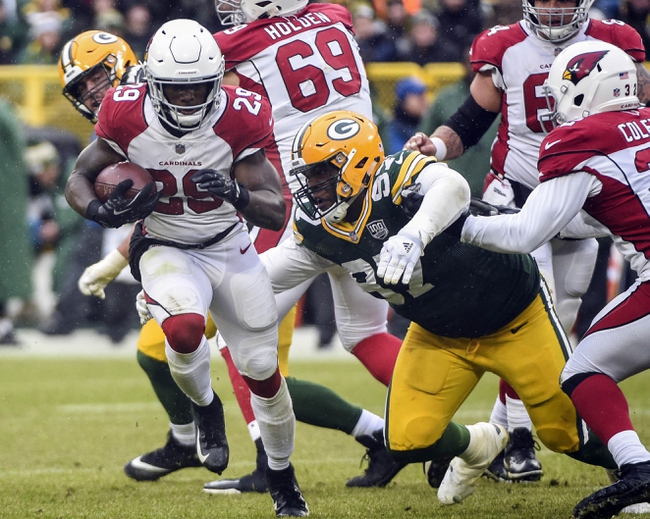 The Arizona Cardinals and the Green Bay Packers meet in a Madden 20 NFL simulation game on Friday night. Click Here to BET This NFL Sim Game

The Arizona Cardinals come into this one looking to build off of a 47-28 win over Washington in their last sim game. Larry Fitzgerald leads Arizona on offense at 83 overall at WR with a 93 catch rating and 91 catching in traffic while Kenyan Drake sits at 81 overall in Arizona’s backfield with 91 speed, 89 acceleration, 90 agility and 87 carrying ratings. Kyler Murray is Arizona’s starting QB at 75 overall with 91 speed, 92 acceleration and 90 agility as well as 89 throwing power. On the defensive side, Chandler Jones leads the Cardinals with a 90 overall rating, including 92 power move and an 86 tackle rating while Patrick Peterson is at 92 overall with 92 speed, 92 acceleration, 95 agility and 89 man coverage at CB.

The Green Bay Packers come into this game looking to add on a 40-7 win over Cincinnati last time out. Davante Adams leads Green Bay on the offensive end at 94 overall, with 94 catching and 94 catching in traffic while also possessing 89 speed and 92 acceleration. Aaron Rodgers is the starting QB with an 89 overall rating, with 94 throwing power, 90 short pass accuracy and ratings in the high-80s in medium and deep pass accuracy while Aaron Jones leads Green Bay’s rushing attack with an 87 overall attribute rating with 93 carrying, 92 juke, 91 speed and 93 acceleration. On defense, Kenny Clark leads Green Bay’s pass rush at 90 overall with 95 strength with 92 block shedding and 89 power moves while Jaire Alexander is not far off at 89 overall to lead the Green Bay secondary at CB, with 92 man coverage in addition to 93 ratings in speed and acceleration with 94 agility. Za’Darius Smith and Adrian Amos come in at 88 and 87 overall respectively as well as a pair of key pieces in a loaded Green Bay defense

I get Green Bay being favored and the Pack looked pretty good against Cincinnati, but in all honesty who hasn’t looked good against Cincinnati in these sim games and anyone who’s been following me lately knows my feelings about Arizona. The Cardinals just keep finding ways to keep themselves in games against the better teams and beat up on teams they should beat. I think this is a situation where Arizona keeps pace with Green Bay til the end, so I’ll take Arizona and the points here. Click Here to BET This NFL Sim Game