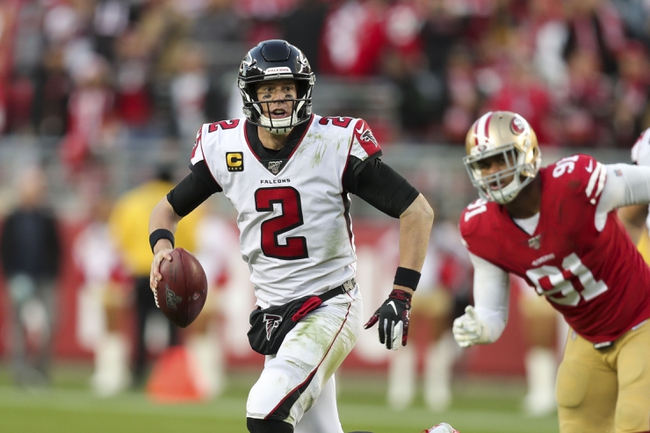 The Atlanta Falcons and the San Francisco 49ers meet in a Madden 20 NFL simulation game on Friday night.

The Atlanta Falcons will be looking to bounce back from a 34-31 loss to the Houston Texans in their last sim appearance. Julio Jones leads the Falcons with a 97 overall rating, with 92 speed and 94 agility to go along with 96 catching, 95 catching in traffic and 98 spectacular catch. Austin Hooper is rated 89 overall at TE with 97 catching while Matt Ryan comes in at 87 overall as Atlanta’s starting pivot and Devonta Freeman leads the Falcons’ ground attack with an 85 overall rating with 92 speed and 94 agility. On defense, Grady Jarrett leads the Falcons with a 90 overall rating with 89 strength, 90 block shedding and 93 power move while Deion Jones is the Falcons’ top linebacker at 86 overall with 89 pursuit, 90 speed and 91 acceleration. Keanu Neal and Desmond Trufant lead the Falcons’ secondary at 85 and 84 overall respectively with Trufant logging 92 speed, 93 acceleration and 96 agility.

The San Francisco 49ers come in after logging a 49-20 win over the Tennessee Titans in their last sim appearance. George Kittle leads the offense for San Fran as a 97 overall rated TE with 98 catching while Emmanuel Sanders comes in as the top WR for the Niners at 89 overall with 94 catching, 92 acceleration and 93 agility. Jimmy Garoppolo is starting quarterback for the 49ers at 84 overall while Tevin Coleman is right behind at RB at 82 overall with 93 speed, 92 acceleration and 93 agility. On the 49ers’ defensive unit, Richard Sherman leads the way at 94 overall at CB, with 99 awareness as well as 98 jumping, 90 man coverage and 99 zone coverage. Nick Bosa fronts the 49ers’ pass rush at 89 overall with 91 finesse move and 91 acceleration. The San Francisco defense also has four additional defenders with at least an 85 overall rating, including Arik Armstead, DeForest Buckner, Dee Ford and Fred Warner.

Atlanta and the points is a tempting combination, but the issue I have is that the Falcons are really inconsistent with their results lately. San Francisco on the other hand remains one of the better teams in the game and I just think that the Niners have enough to win this game by at least a touchdown, so I’ll lay the points with San Fran here.