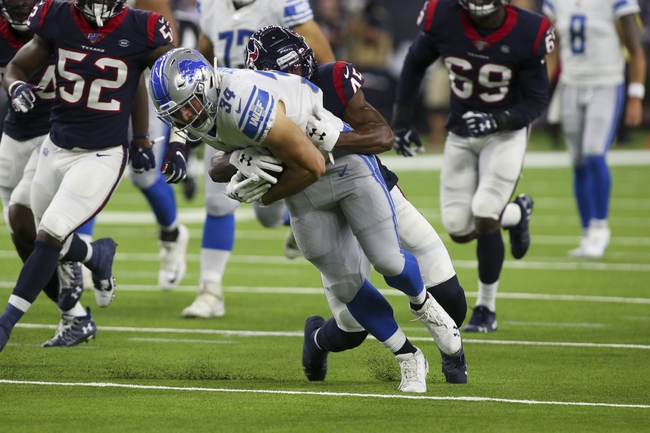 The Houston Texans and the Detroit Lions meet in a Madden 20 NFL simulation game on Saturday afternoon.

The Houston Texans will look to build on a 34-31 win over Atlanta from their last sim appearance. DeAndre Hopkins leads the Texans rated at 98 overall with 98 catching as well as 99 marks in catching in traffic, spectacular catch, release and jumping with 92 speed, 93 acceleration and 92 agility at WR. Deshaun Watson is rated at 86 overall as Houston’s starting QB with 88 acceleration, 84 speed and 89 throw power while Lamar Miller is close behind at 84 overall in the Texans’ backfield with 91 carrying, 89 juke, 92 speed, 91 agility and 91 acceleration. Defensively, J.J. Watt leads the way at 97 overall with 97 strength, 94 impact blocking, 97 tackling, 93 finesse move and 94 power move. D.J. Reader and Justin Reid also come in at 84 overall for Houston’s defense with Reader on the defensive line and Reid in the secondary.

The Detroit Lions will try to bounce back from a 17-12 loss to Arizona in their last matchup. Kenny Golladay and Marvin Jones Jr. are the top receiver duo for Detroit with Golladay at 86 overall and Jones Jr. at 85 overall with both having a 90 speed rating and a low-90s acceleration rating. Matthew Stafford is Detroit’s starting QB with an 82 overall rating, including a 94 attribute rating in throwing power. On the defensive side of the ball, Damon Harrison Sr. leads Detroit with an 89 overall rating, including a 95 grade in impact blocking and 92 in tackling as well as a 91 mark in block shedding. Darius Slay Jr. may not be with Detroit anymore, but he still is on the team here and has high-80s ratings in man and zone coverage as well as low-90s ratings in speed, acceleration and agility.

I’m not sure which way to lean in this game, as Houston’s had success here and there but a lot of the success has come as an underdog. On the other side, Detroit has some ups and downs of their own, but the Lions also have trouble keeping points off of the board. Instead of trying to pick a side, I’ll side with the over. I can easily see this being a 34-23 score or something like that and get this one closer to 60 points.