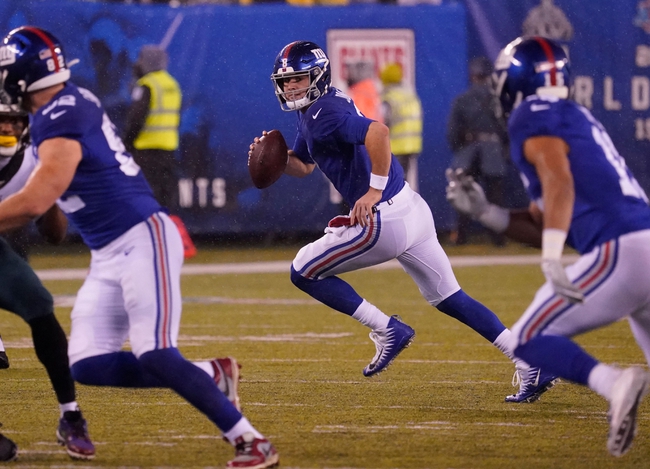 The Pittsburgh Steelers and the New York Giants meet in a Madden 20 NFL simulation game on Saturday afternoon.

The Pittsburgh Steelers will look to bounce back from a 35-12 loss to the Jets last time out. JuJu Smith-Schuster leads Pittsburgh on offense at WR with an 86 overall rating, which includes a rating of 91 speed and 92 acceleration as well as 90 catching and 93 catching in traffic while James Conner is Pittsburgh’s lead RB with an 81 overall rating with 86 speed, 89 acceleration and 89 carrying. Ben Roethlisberger is the starting QB with an 81 overall rating with 89 throwing power and 89 short passing accuracy. On the defense, Cameron Heyward leads the Steelers rated at 90 overall with 93 strength, 91 tackling and 92 power move while Stephon Tuitt is on the other side of the front at 87 overall with 90 block shedding and 91 strength.

The New York Giants come into this one looking to improve after a 1-2 record in the Sim Classic, missing out on any playoff round action with a -23 point differential. Saquon Barkley leads the G-Men on offense with an 89 overall rating, with 92 speed, 93 acceleration, 96 agility, 94 carrying and 94 juke ratings. Evan Engram leads New York’s receiving corps at TE at 88 overall with 88 catching, 90 speed and 91 acceleration while Golden Tate III and Sterling Shepard make up a solid pairing at wide receiver with each logging 90 speed and 91 acceleration with Tate III having 89 catching compared to Shepard’s 88. On the defense, Leonard Williams is the only player rated 80+ overall on the Giants on that end of the ball.

The Steelers had a bad showing against the Jets, but for the most part the Steelers have been pretty good offensively and have done a good job shutting teams down with their defense. New York continues to have issues even in simulated games and the fact of the matter is Big Blue is not a team I’m trying to get behind, simulated football or not. I’ll lay the big number with the Steelers here.