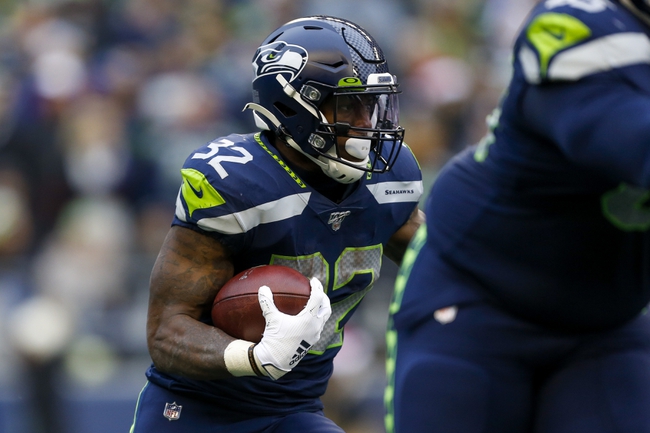 The Seattle Seahawks and the Carolina Panthers meet in a Madden 20 NFL simulation matchup on Sunday night.

The Seattle Seahawks will be looking to build on a 33-22 win over the Los Angeles Rams in their last sim appearance. Russell Wilson leads Seattle’s offense with a solid 97 overall rating with 86 speed, 90 acceleration and 93 agility as well as 91 throwing power and 93 short pass accuracy, 94 medium pass accuracy and 96 deep pass accuracy. Tyler Lockett is the top WR for Seattle with an 88 overall rating including 93 catching, 93 speed, 92 acceleration and 97 agility while Chris Carson also has an 86 rating in leading Seattle’s backfield with 88 speed, 89 acceleration and 91 stiff arm. On the defensive end, Bobby Wagner is Seattle’s top-rated player with a 98 overall rating, with 96 tackling, 90 impact blocking, 98 power, as well as high-90s attribute ratings in pursuit and play recognition. Jadeveon Clowney is right behind on the D-line at 88 overall with 95 pursuit, 91 play recognition, 87 speed and 90 acceleration.

The Carolina Panthers will try to bounce back from a disappointing performance in the Sim Classic as the Panthers finished with a 1-2 group stage record and missed out on the playoff rounds. Carolina is in one of the most envied spots in this year’s edition of Madden as the only team with two of the game’s five 99 overall rated players, and they have one on each side of the ball. Christian McCaffrey leads Carolina’s offense with 92 speed, 93 acceleration and 97 agility as well as 98 carrying and 96 juke. Greg Olsen is 88 overall at tight end with 93 catching and 93 catching in traffic while D.J. Moore comes in at 85 overall with 93 speed and acceleration and 81 catching at WR. Cam Newton may finally be healthy in the game, but his overall rating is still down to 79 yet he still remains the starting QB for Carolina. On defense, Luke Kuechly holds onto the other 99 rating at linebacker, with 90 jumping, 91 impact blocking and 99 tackling as well as 99 play recognition and 96 pursuit. After Kuechly, Gerald McCoy and Kawann Short anchor the defensive line at 85 and 84 overall, with both possessing strength and impact blocking ratings in the low-90s.

Carolina was impressive in the early going in these sim games, but they’ve cooled off lately, and while anything can happen, I still feel that Seattle is just the better team here. The Seahawks have a clear edge at QB and are the better overall defensive team, and winning this one by a field goal doesn’t seem like that much of a stretch so I’ll lay the points with the Seahawks here.