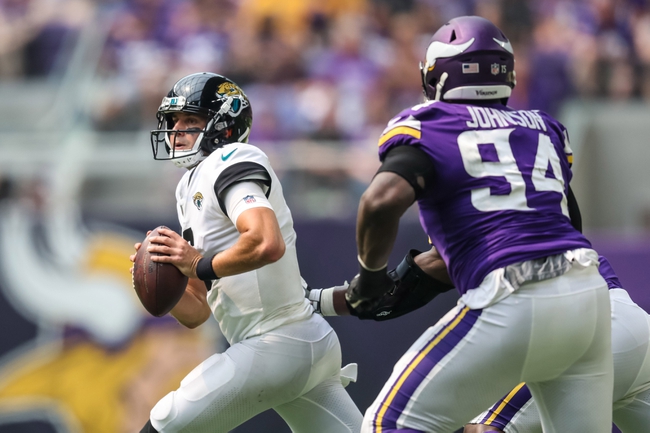 The Jacksonville Jaguars and the Minnesota Vikings square off in a Madden 20 NFL simulation game on Sunday afternoon.

The Jacksonville Jaguars will look to rebound from a 1-2 showing in the Sim Classic that saw Jacksonville fail to make it out of the group stage. Leonard Fournette leads the Jaguars on offense with an 83 overall rating with 92 speed and 96 carrying while D.J. Chark Jr. sits at 81 overall at WR with 91 catching as well. On the defensive end for the Jags, each level of the defense has a player rated at 84 overall, with A.J. Bouye leading the secondary, Telvin Smith in the linebacking group and Yannick Ngakoue on the defensive line. Bouye owns an 89 speed rating with 94 acceleration and 91 agility while Smith has 87 speed with 89 acceleration and 88 agility.

The Minnesota Vikings will look to build off of a 22-12 win over the Washington Redskins in their last outing. Stefon Diggs isn’t with Minnesota in real life anymore, but he’s still a Viking in this game with a 93 overall rating with 92 catching, 91 speed, 93 acceleration and 93 agility. Adam Thielen has a 91 overall rating at another WR spot with 90 speed and 93 grades in acceleration and agility as well. Thielen also has 95 catching and 90 catching in traffic. Dalvin Cook leads Minnesota’s ground offense at 90 overall with 91 speed, 92 acceleration and 94 agility while Kyle Rudolph is an 84 overall rated TE and Kirk Cousins is 84 overall at starting QB. On the defensive end, Harrison Smith leads Minnesota at 95 overall with 93 power, 92 zone coverage, 95 play recognition and 93 pursuit. The Vikings have a group of 90 overall rated defenders, with Everson Griffen and Danielle Hunter sitting opposite on the D-line while Eric Kendricks hunkers down the linebacking corps. Linval Joseph also grades at 86 overall in the middle of the defensive line.

This is a ton of points to give up, even in a sim game. However, Jacksonville doesn’t have much going for them offensively outside of Fournette and Chark and the defense leaves a lot to be desired. Minnesota has a ton of talent on both sides of the ball here and I just think this is a game where the Jags are overmatched. I’ll lay the points with Minnesota.