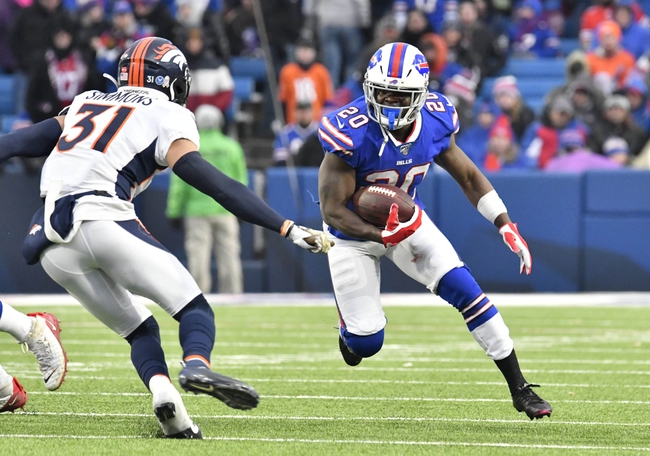 The Denver Broncos and the Buffalo Bills meet in a Madden 20 NFL simulation game on Monday afternoon.

The Denver Broncos will look to rebound after a narrow 25-24 loss to New England in their last game. Phillip Lindsay leads the Broncos’ offense with an 85 overall rating at running back with 93 carrying as well as 93 speed and 91 acceleration. Courtland Sutton is not far off of the pace as Denver’s top wideout with 89 speed, 92 acceleration and 92 catching as part of his 84 overall rating. On defense, Von Miller leads the Broncos with a team-high 96 overall rating, including 93 tackling, 89 impact blocking, 90 finesse move and 93 power move. Chris Harris Jr. is at corner at 90 overall with a 91 man coverage rating and 90 speed. Justin Simmons and Kareem Jackson make up a strong combination in the Denver secondary at 89 and 87 overall.

The Buffalo Bills come into this one looking to shake off a decent showing in the Sim Classic, finishing with a 1-2 record and missing out on playoff action. Cole Beasley and John Brown lead Buffalo on offense at the two wide receiver spots, coming in at 83 overall, with Brown being the faster of the two in-game with 92 speed and 90 acceleration while Beasley is the shiftier receiver with 92 agility. Frank Gore and Devin Singletary are the duo at running back for the Bills at 80 overall, while Josh Allen is at 77 overall as the Bills’ starting QB. On defense, the defensive backs are Buffalo’s greatest asset with Micah Hyde and Tre’Davious White both at 88 overall, with White possessing 91 speed and 93 acceleration at cornerback while Hyde has a 91 zone coverage rating at free safety. Jordan Poyer is 85 overall at strong safety and Lorenzo Alexander is a decent 83 overall at one of the outside linebacker positions.

I’ve gone back and forth on this game and to be honest, I’m not sure why the Bills are favored here. Sure, I have my own opinions on Buffalo, but the Bills have been one of the more disappointing teams in these sim games and their success hasn’t transferred from reality to the game. Denver isn’t a world-beater in their own right, but the Broncos just took New England to the wire and have had some solid performances lately. I’ll take a shot with Denver and the points here.