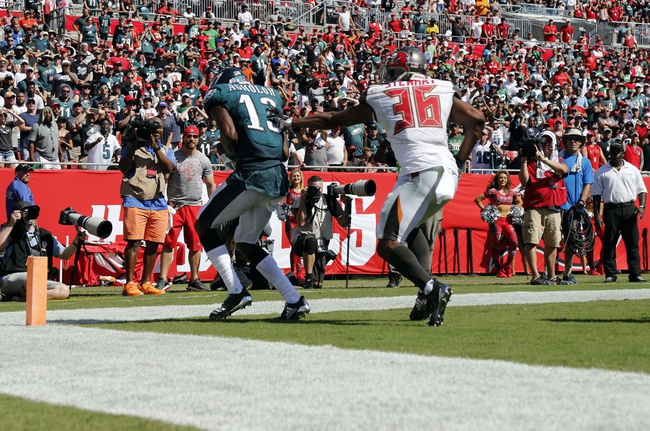 The Philadelphia Eagles and the Tampa Bay Buccaneers meet in a Madden 20 NFL simulation game on Monday afternoon.

The Philadelphia Eagles will look to build on a 23-10 win over the Los Angeles Rams in their last sim matchup. Zach Ertz leads the Eagles on offense with a 90 overall rating with 87 acceleration and 93 catching while Alshon Jeffery and DeSean Jackson make up the top receiver pair for Philadelphia at 85 and 84 overall respectively. Carson Wentz is starting quarterback for Philly at 83 overall while the Eagles’ top rated players are on the right side of their offensive line with Jason Kelce at center with a 94 overall rating, Brandon Brooks at 93 overall at right guard and right tackle Lane Johnson at 89 overall. On the defense, Fletcher Cox leads Philly at 95 overall with 95 strength, 93 tackling and 96 power move while Brandon Graham is right defensive end at 87 overall with 90 power move and 93 impact blocking. Malcolm Jenkins leads the Eagles’ secondary at 86 overall with 91 acceleration, 90 agility and 88 zone coverage.

The Tampa Bay Buccaneers will look to bounce back from a 42-23 loss to New Orleans in their last outing. Mike Evans and Chris Godwin lead Tampa Bay on offense as the top receiving duo on the team with Evans owning a team-high 92 overall rating with 90 catching, 95 catching in traffic and 97 spectacular catch while Godwin is 87 overall with 97 catching. Jameis Winston comes in at 78 overall at starting quarterback for Tampa Bay in this year’s edition of Madden. On the Buccaneers’ defense, Lavonte David is the leading defender with a 90 overall rating, with 92 pursuit, 87 block shedding, 88 impact blocking and 89 tackling. Ndamukong Suh is lined up front at 86 overall with 93 impact blocking and Vita Vea is right behind alongside at 85 overall with 91 impact blocking.

I am tempted by the Buccaneers and free points, but we’ve seen the Eagles hang against better teams and beat up on teams that they should beat up on and Tampa Bay falls into the latter category. I like what Tampa Bay’s done, but they’ve definitely regressed in their last few games and I could see the Eagles winning this one by a TD, so I’ll lay the points with Philadelphia here.