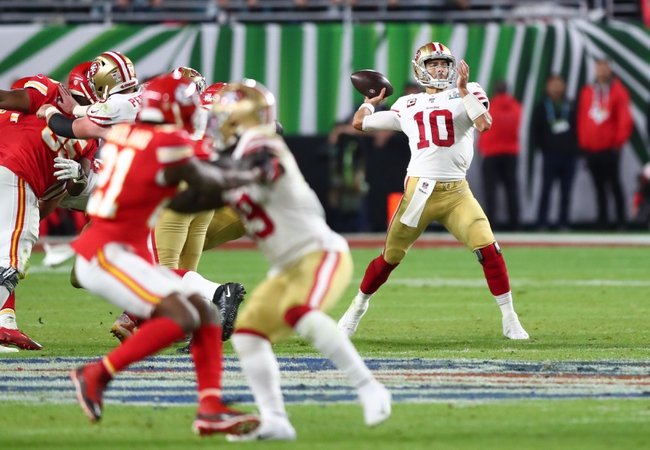 The San Francisco 49ers and the New England Patriots meet in a Madden 20 NFL simulation game on Tuesday night.

The San Francisco 49ers will try to add onto a 41-27 win over Atlanta in their last game. George Kittle leads the offense for the Niners as a 97 overall rated tight end with 98 catching while Emmanuel Sanders comes in as the top wideout for the 49ers at 89 overall with 94 catching, 92 acceleration and 93 agility. Jimmy Garoppolo is starting quarterback for the 49ers at 84 overall while Tevin Coleman is right behind at running back at 82 overall with 93 speed, 92 acceleration and 93 agility. On the 49ers’ defensive unit, Richard Sherman leads the way at 94 overall at CB, with 99 awareness as well as 98 jumping, 90 man coverage and 99 zone coverage. Nick Bosa fronts the 49ers’ pass rush at 89 overall with 91 finesse move and 91 acceleration. The San Francisco defense also has four additional defenders with at least an 85 overall rating, including Arik Armstead, DeForest Buckner, Dee Ford and Fred Warner.

The New England Patriots will try to build on a narrow 25-24 win over the Denver Broncos in their last sim matchup. Tom Brady leads New England at QB in this game with a 91 overall rating with 90 throw power and 96 short pass accuracy while Julian Edelman is tops on the depth chart in New England’s receiving corps at 87 overall with 91 acceleration, 91 agility and 85 catching. James White leads the Patriot rushing attack at 83 overall with 89 speed, 92 acceleration and 90 agility. On defense, Stephon Gilmore leads the Patriots with a 98 overall rating with 99 awareness and 92 speed with 94 acceleration and 94 agility while also rated at 98 in man coverage and 96 in zone coverage. Devin McCourty is New England’s second-highest rated CB at 92 overall with 93 zone coverage and 90 marks across the board in speed, agility and acceleration. Dont’a Hightower leads New England’s linebacking group at 88 overall with 91 impact blocking and 92 tackling in addition to 93 play recognition and 93 pursuit.

This is one of the harder games to call as both teams have looked so good lately, with San Fran piling on wins while New England won the Sim Classic. However, the Patriots had a hard time putting away Denver, and while I’ve said it’s all about which simulation you end up getting for the bet, it still is a bit nerve racking as the Patriots haven’t been consistently dominant over the course of these sim games. San Francisco has consistently played well for the most part and getting points with the Niners seems like a decent play even against New England so I’ll take the 49ers and the points here.

The pick in this article is the opinion of the writer, not a Sports Chat Place site consensus.
Previous Pick
Los Angeles Chargers vs. Arizona Cardinals - 6/2/20 Madden20 NFL Sim Pick, Odds, and Prediction
Next Pick
Which NFL teams scored the most points in a game?