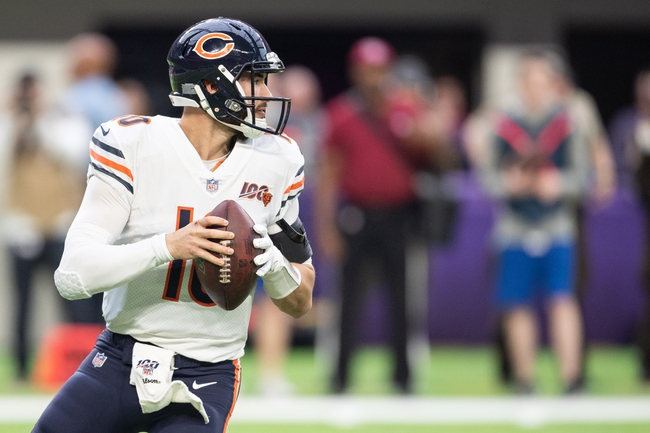 The Chicago Bears and the Pittsburgh Steelers meet in a Madden 20 NFL simulation game on Tuesday afternoon.

The Chicago Bears come into this game looking to rebound from a 6-3 loss to the Seattle Seahawks in their last sim appearance. Allen Robinson II leads Chicago on the offensive end with an 89 overall rating with 90 speed and 93 acceleration as well as 96 catching while Trey Burton is at 82 overall at TE and Taylor Gabriel is an 81 overall rated wide receiver. Tarik Cohen leads the Bears’ backfield at 78 overall while Mitch Trubisky is still Chicago’s starting quarterback at 73 overall. On defense, Khalil Mack leads Chicago with a solid 98 overall rating, with 87 speed and 89 acceleration along with 94 tackling, 90 impact blocking, 91 block shedding, 91 finesse move and 95 power move. Eddie Jackson is rated 89 overall at free safety with a 94 grade in zone coverage and 90 acceleration while Kyle Fuller has 92 speed and acceleration at cornerback with 91 zone coverage and Akiem Hicks is at 88 overall at left defensive end with 91 block shedding and 89 power move.

The Pittsburgh Steelers will look to build on a 39-17 win over the New York Giants in their last sim game. JuJu Smith-Schuster leads the Steelers on the offensive side of the ball at WR with an 86 overall rating, which includes a rating of 91 speed and 92 acceleration as well as 90 catching and 93 catching in traffic while James Conner is Pittsburgh’s top RB with an 81 overall rating with 86 speed, 89 acceleration and 89 carrying. Ben Roethlisberger is the starting quarterback with an 81 overall rating with 89 throwing power and 89 short passing accuracy. On the defense, Cameron Heyward leads the Steelers rated at 90 overall with 93 strength, 91 tackling and 92 power move while Stephon Tuitt is on the other side of the front at 87 overall with 90 block shedding and 91 strength.

Chicago continues to play these close games and stepped up against Seattle, but scoring 3 points isn’t going to win you many games, in reality or in a simulation. I also don’t trust Mitch Trubisky as far as I can throw him, and that’s something from reality that’s translated into the game as well. Pittsburgh’s just been the more consistent team in terms of putting points on the board and they’ve also been pretty good at winning games and covering the spread lately. I’ll lay the points with Pittsburgh here.