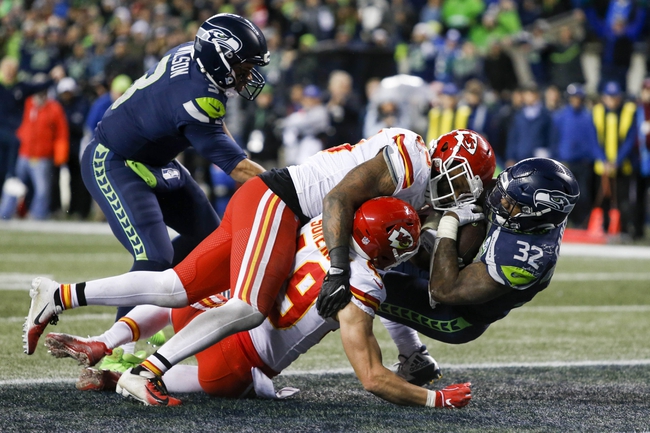 The Seattle Seahawks and the Kansas City Chiefs meet in a Madden 20 NFL simulation game on Wednesday night.

The Seattle Seahawks will look to build on a 16-6 win over the Carolina Panthers in their last outing. Russell Wilson leads the offense for Seattle with a solid 97 overall rating with 86 speed, 90 acceleration and 93 agility as well as 91 throwing power and 93 short pass accuracy, 94 medium pass accuracy and 96 deep pass accuracy. Tyler Lockett is the #1 WR for Seattle with an 88 overall rating including 93 catching, 93 speed, 92 acceleration and 97 agility while Chris Carson also has an 86 rating in leading Seattle’s backfield with 88 speed, 89 acceleration and 91 stiff arm. On the defensive end, Bobby Wagner is the Seahawks’ top-rated defender with a 98 overall rating, with 96 tackling, 90 impact blocking, 98 power, as well as high-90s attribute ratings in pursuit and play recognition. Jadeveon Clowney is right behind on the D-line at 88 overall with 95 pursuit, 91 play recognition, 87 speed and 90 acceleration.

The Kansas City Chiefs will look to build off of a 44-41 win over the Philadelphia Eagles in their last sim matchup. Patrick Mahomes comes into this one as one of this year’s Madden’s five highly sought after players with a 99 overall rating, with 96 throwing power as well as 97 short pass accuracy, 95 medium pass accuracy and 93 deep pass accuracy. Tyreek Hill isn’t far off at the top of the list at 96 overall, with a 91 attribute rating in catching along with 97 juke, 99 speed, 99 acceleration and 98 agility while Travis Kelce is also at 96 overall as Kansas City’s top TE with attributes of 99 awareness, 85 speed. 91 catching in traffic and 91 catching overall. On the defense, Chris Jones and Tyrann Mathieu share the team-high rank on the Chiefs with Jones leading the pass rush at 92 overall with 91 strength, 90 tackling, 89 finesse move and 95 power move while Mathieu anchors KC’s secondary at 92 overall with a 90 man coverage rating as well as 89 in zone coverage while also being rated at 90 speed, and 92 in acceleration and 92 agility.

I get the Chiefs being favored, but the problem for me is that in these sim games, Kansas City’s defense has been unreliable, giving up 30-40 points on a regular basis. Seattle’s had their ups and downs too, but the Seahawks are balanced on both sides of the ball and bring a lot of value when getting them with points. I’ll take a shot with Seattle and the points in a game I could see the Seahawks winning outright.