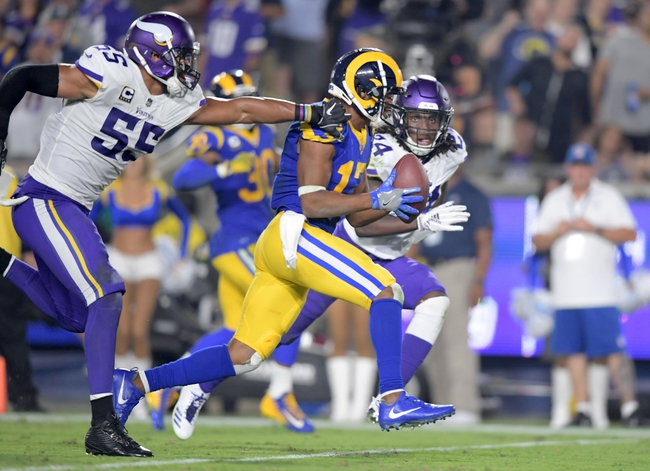 The Minnesota Vikings and the Los Angeles Rams meet in a Madden 20 NFL simulation game on Thursday night.

The Minnesota Vikings will look to build on a 41-10 win over the Jacksonville Jaguars in their last game. Stefon Diggs isn’t a Viking in real life anymore, but he’s still with the team in this game with a 93 overall rating with 92 catching, 91 speed, 93 acceleration and 93 agility. Adam Thielen has a 91 overall rating at another WR spot with 90 speed and 93 grades in acceleration and agility as well. Thielen also has 95 catching and 90 catching in traffic. Dalvin Cook leads Minnesota’s ground attack at 90 overall with 91 speed, 92 acceleration and 94 agility while Kyle Rudolph is an 84 overall rated TE and Kirk Cousins is 84 overall as the starting QB. On the defensive end, Harrison Smith leads Minnesota at 95 overall with 93 power, 92 zone coverage, 95 play recognition and 93 pursuit. The Vikings have a group of 90 overall rated defenders, with Everson Griffen and Danielle Hunter sitting opposite on the D-line while Eric Kendricks hunkers down the linebacking corps. Linval Joseph also grades at 86 overall in the middle of the defensive line.

The Los Angeles Rams will look to build off of a 33-19 win over Dallas last time out. Cooper Kupp leads the offense for the Rams as well as the receiving group with an 87 overall rating with 94 agility and 95 catching while Robert Woods is not far off of the pace with an 86 overall rating including 94 catching and Brandin Cooks follows at 85 overall with 95 speed, 92 acceleration and 95 agility. Todd Gurley II leads the Rams’ ground attack at 86 overall with 91 speed and 91 acceleration as well as 95 agility and 89 carrying. On defense, Aaron Donald is one of the s five highly sought after 99 overall rated players with 90 acceleration, 99 power move, 96 finesse move, 97 block shedding, 93 impact blocking and 92 tackling. Jalen Ramsey leads the Rams’ secondary at 94 overall with 95 man coverage and 95 zone coverage with 92 speed, 93 acceleration and 90 agility.

The points with the Rams are tempting, but while the Rams got the win over Dallas, the fact is that the Rams have been beaten up on more often than not, despite having a bunch of talented players on their roster. Minnesota has been one of the better sim teams over the last couple of months, and I just see them winning this game by a touchdown so I’ll lay the points with Minnesota in this spot.