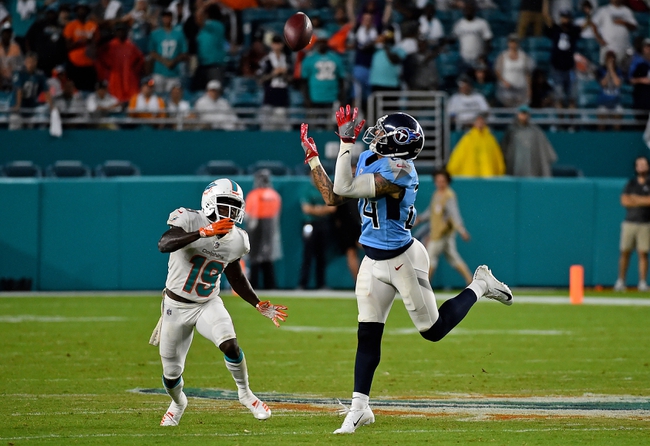 The Tennessee Titans and the Miami Dolphins meet in a Madden 20 NFL simulation game on Thursday afternoon.

The Tennessee Titans will try to rebound from a 49-20 loss to San Francisco in their last sim game. Derrick Henry leads Tennessee with a 91 overall rating with 91 speed, 87 strength, 91 carrying and 98 stiff arm while Delanie Walker comes up at 86 overall as Tennessee’s top TE with 86 catching. A.J. Brown and Corey Davis make up the top pair at WR, rated just 80 and 79 overall respectively, while Ryan Tannehill comes in at 80 overall at starting QB for the Titans. On defense, Kevin Byard shares the team-high rating on the defensive side at 91 overall with 93 zone coverage and 90 speed while Logan Ryan is at 86 overall at cornerback with 87 speed, 91 acceleration and 90 agility with 92 play recognition. Jurrell Casey also checks in at 85 overall at right defensive end with 92 play recognition, 89 tackling and 89 impact blocking as well as 92 strength.

The Miami Dolphins come into this one looking to bounce back from a disappointing showing in the Sim Classic, going 0-3 in the group stage with a -41 point differential. Devante Parker leads Miami with an 84 overall rating, including 91 speed and 91 acceleration while Albert Wilson is at 76 overall at another wide receiver spot with 91 speed and acceleration as well. Ryan Fitzpatrick leads the way at quarterback for the Dolphins, but only with a 74 overall rating. On defense, three of Miami’s four 80+ rated overall players are all in the secondary, with Xavien Howard and Aqib Talib at 82 and 81 overall with Howard owning 92 speed and 92 acceleration while Talib has 91 acceleration and 91 agility. Reshad Jones is also at 82 overall at strong safety with 86 speed and 89 acceleration.

I’m having a hard time picking a side here, as Miami didn’t really show up in the Sim Classic but I don’t really trust Tennessee outside of Derrick Henry and Delanie Walker. With that said, in a lot of these sim games, Miami has had no issues putting up 30+ points and while Tennessee is capable in their own right, I just think Miami is capable of holding their own so I’ll take a shot with the Dolphins and the points here.