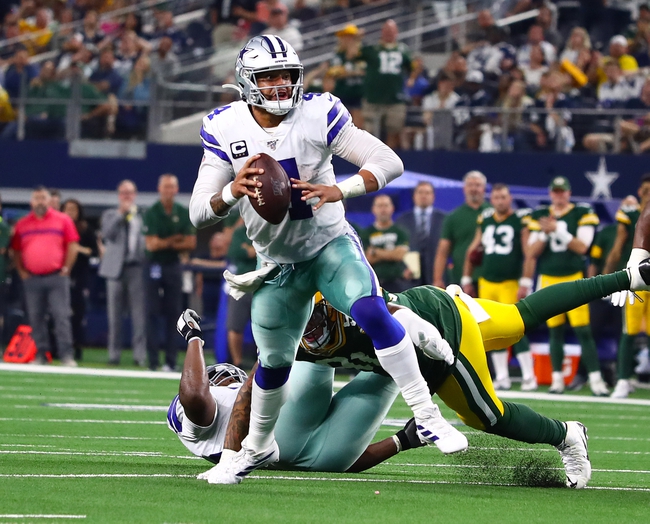 The Dallas Cowboys and the Green Bay Packers meet in a Madden 20 NFL simulation game on Friday afternoon.

The Dallas Cowboys will look to rebound from a 33-19 loss to the Los Angeles Rams in their last outing. Ezekiel Elliott leads the Dallas on offense, rated 93 overall at running back with 90 speed, 91 acceleration and 95 agility while Amari Cooper leads the Cowboys’ receiving corps at 91 overall with 92 speed, 96 agility and 89 catching. Dak Prescott has an 81 overall rating as starting quarterback with 87 throwing power and 88 short pass accuracy. The Cowboys also have some size on their offensive line, with Zack Martin sporting a team-high 97 overall rating while Tyron Smith is at left tackle at 91 overall. On the defensive side of the ball, Byron Jones and Demarcus Lawrence lead the way for the Cowboys, both at 88 overall, with Lawrence owning a 93 finesse move rating, 89 power move and 88 block shedding rating while Jones has 92 speed, 94 acceleration and 96 agility to go along with an 84 man coverage rating and 90 zone coverage rating in the Cowboys’ secondary.

The Green Bay Packers will try to bounce back from a 34-20 loss to Carolina in their last outing. Davante Adams leads Green Bay on offense at 94 overall, with 94 catching and 94 catching in traffic while also possessing 89 speed and 92 acceleration. Aaron Rodgers is the starting quarterback with an 89 overall rating, with 94 throwing power, 90 short pass accuracy and ratings in the high-80s in medium and deep pass accuracy while Aaron Jones leads Green Bay’s rushing attack with an 87 overall attribute rating with 93 carrying, 92 juke, 91 speed and 93 acceleration. On defense, Kenny Clark leads the Pack’s defensive front at 90 overall with 95 strength with 92 block shedding and 89 power moves while Jaire Alexander is not far off at 89 overall to lead the Green Bay secondary at cornerback, with 92 man coverage in addition to 93 ratings in speed and acceleration with 94 agility. Za’Darius Smith and Adrian Amos come in at 88 and 87 overall respectively as well as a pair of key pieces in a strong defensive group for Green Bay.

I’ve gone back and forth on this one, as it could genuinely go either way, which is probably why the line for this game is a pick ‘em at the time of posting. However, while this is a coin flip, I just think that the Packers are the more reliable option given what we had seen up to this point. This is a game I’d stay away from personally, but if forced to pick, I’d pick Green Bay to get the win here.