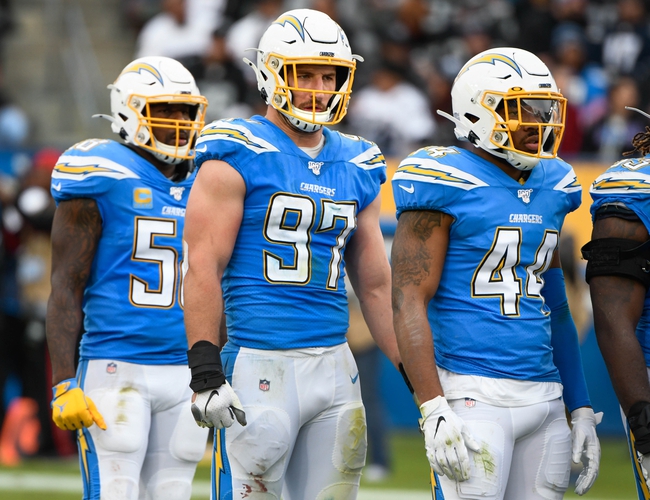 The Los Angeles Chargers will look to bounce back from a 33-27 loss to the Pittsburgh Steelers last time out. Keenan Allen leads the Chargers at 92 overall with 90 catching and 94 catching in traffic in addition to 89 speed, 92 acceleration and 92 agility while Hunter Henry is the top tight end for the Chargers at 87 overall with 89 catching as well. Melvin Gordon III and Philip Rivers aren’t on the Chargers in reality anymore, but they’re still on L.A. in this game at 84 overall with Gordon rated at 92 speed and 92 agility with 90 carrying and 90 juke while Rivers has 94 short pass accuracy and 92 medium pass accuracy. On defense, the Chargers are keeping some of their other top-rated players with Joey Bosa leading the defensive front at 91 overall with 90 impact blocking as well as 97 finesse move and 87 strength while Casey Hayward Jr. is at 91 overall in the secondary with 91 acceleration and 92 agility in addition to 89 speed and 90+ ratings in man coverage and zone coverage. Melvin Ingram III and Derwin James Jr. each come in at 88 overall on the defensive end for the Chargers.

The Los Angeles Rams will look to build off of a 33-19 win over the Dallas Cowboys last time out. Cooper Kupp leads the offense for the Rams as well as the receiving group with an 87 overall rating with 94 agility and 95 catching while Robert Woods is not far off of the pace with an 86 overall rating including 94 catching and Brandin Cooks follows at 85 overall with 95 speed, 92 acceleration and 95 agility. Todd Gurley II leads the Rams’ ground attack at 86 overall with 91 speed and 91 acceleration as well as 95 agility and 89 carrying. On defense, Aaron Donald is one of the s five highly-regarded 99 overall rated players with 90 acceleration, 99 power move, 96 finesse move, 97 block shedding, 93 impact blocking and 92 tackling. Jalen Ramsey leads the Rams’ secondary at 94 overall with 95 man coverage and 95 zone coverage with 92 speed, 93 acceleration and 90 agility.