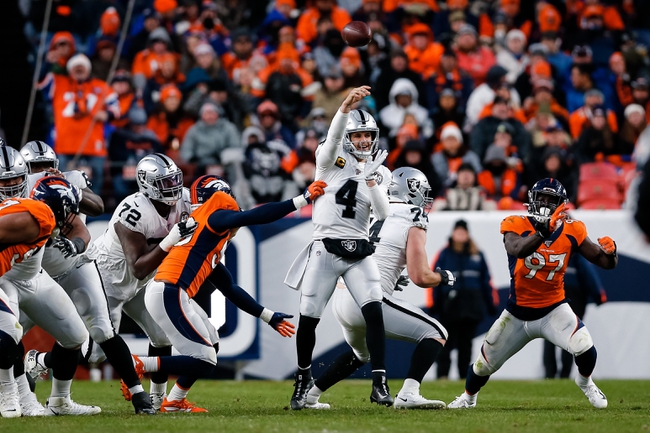 The New England Patriots and the Oakland Raiders meet in a Madden 20 NFL simulation game on Sunday night.

The New England Patriots will look to rebound after a 30-27 loss to the Indianapolis Colts last time out. Tom Brady leads the Patriots at QB in this year’s game with a 91 overall rating with 90 throw power and 96 short pass accuracy while Julian Edelman is number one on the depth chart in New England’s receiving corps at 87 overall with 91 acceleration, 91 agility and 85 catching. James White leads the Patriots’ rushing attack at 83 overall with 89 speed, 92 acceleration and 90 agility. On defense, Stephon Gilmore leads the Patriots with a 98 overall rating with 99 awareness and 92 speed with 94 acceleration and 94 agility while also rated at 98 in man coverage and 96 in zone coverage. Devin McCourty is New England’s second-highest rated defensive back at 92 overall with 93 zone coverage and 90 marks across the board in speed, agility and acceleration. Dont’a Hightower leads New England’s linebacking group at 88 overall with 91 impact blocking and 92 tackling in addition to 93 play recognition and 93 pursuit.

The Oakland Raiders will look to rebound from a 36-27 loss to Cincinnati in their last sim appearance. The Raiders’ greatest strength is their offensive line with Rodney Hudson at 93 overall, Richie Incognito at 87 overall and Trent Brown at 86 overall. Josh Jacobs and Darren Waller each have 85 overall ratings, with Jacobs owning 96 carrying and 91 acceleration at RB while Waller has 89 speed, 89 acceleration and 96 catching at TE. Tyrell Williams is the Raiders’ top wide receiver at 82 overall with 92 speed, 93 acceleration and 95 agility while Derek Carr is still the Raiders’ starting QB with an 80 overall rating. On defense, Lamarcus Joyner comes in with an 83 overall rating, including 88 speed and 92 acceleration, but after Joyner, every defender on the Raiders owns a 79 overall rating or lower.

I get New England being favored here as the better team, but the Pats have played themselves into some close games lately and actually lost to the Colts. Oakland’s had their own moments, but even in losing we’ve seen the Raiders put up some points and I just think this is a case of too many points, even for New England so give me Oakland and the points in this one.