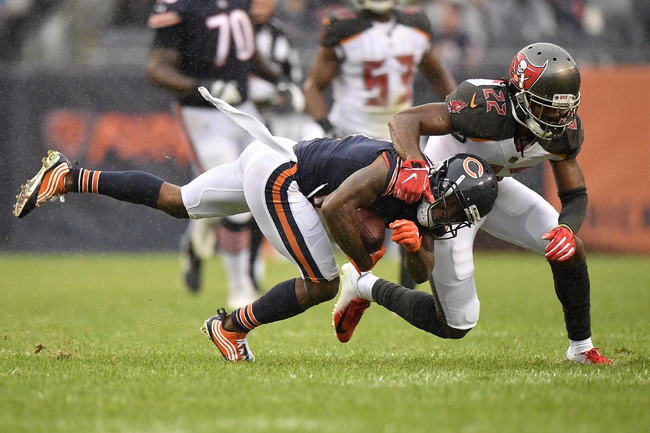 The Chicago Bears and the Tampa Bay Buccaneers meet in a Madden 20 NFL simulation game on Sunday afternoon.

The Chicago Bears come into this game looking to bounce back from a 29-24 loss to Denver last time out. Allen Robinson II leads the offense for Chicago with an 89 overall rating with 90 speed and 93 acceleration as well as 96 catching while Trey Burton is at 82 overall at TE and Taylor Gabriel is an 81 overall rated WR. Tarik Cohen leads the backfield for Chicago at 78 overall while Mitch Trubisky is still Chicago’s starter under center at 73 overall. On defense, Khalil Mack leads Chicago with a solid 98 overall rating, with 87 speed and 89 acceleration along with 94 tackling, 90 impact blocking, 91 block shedding, 91 finesse move and 95 power move. Eddie Jackson is rated 89 overall at free safety with a 94 grade in zone coverage and 90 acceleration while Kyle Fuller has 92 speed and acceleration at cornerback with 91 zone coverage and Akiem Hicks is at 88 overall at left defensive end with 91 block shedding and 89 power move.

The Tampa Bay Buccaneers will look to rebound from a 37-33 loss to Philadelphia last time out. Mike Evans and Chris Godwin lead the Bucs on offense as the top receiving pair on the team with Evans owning a team-high 92 overall rating with 90 catching, 95 catching in traffic and 97 spectacular catch while Godwin is 87 overall with 97 catching. Jameis Winston comes in at 78 overall at starting QB for Tampa Bay in this year’s edition of the video game. On the Bucs’ defense, Lavonte David is the leader with a 90 overall rating, with 92 pursuit, 87 block shedding, 88 impact blocking and 89 tackling. Ndamukong Suh is lined up front at 86 overall with 93 impact blocking and Vita Vea is right behind alongside at 85 overall with 91 impact blocking.

It’s hard for me to really back a side here as the Bears are the better team, but they don’t really blow many teams out and they play in a lot of close games, while the Bucs, even in these sim games are hard to trust with consistency. Instead, I’m going to side with the under. I think this is a game that struggles to reach 50 points if it does and I think we could see a 24-21 game or something similar so I’ll take the under here.