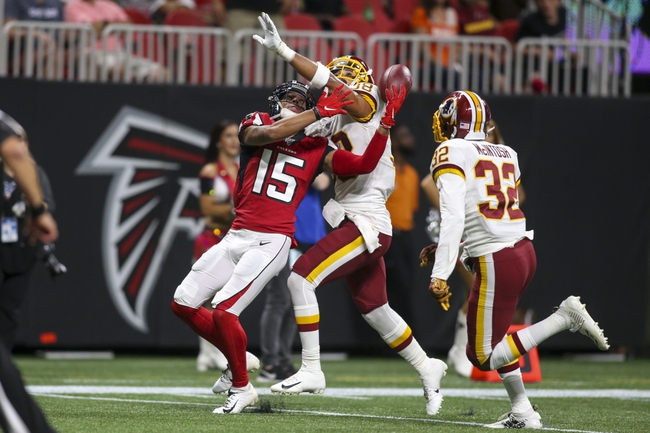 The Atlanta Falcons and the Washington Redskins meet in a Madden 20 NFL simulation game on Sunday afternoon.

The Atlanta Falcons will look to build on a 31-27 win over the Eagles in their last sim appearance. Julio Jones leads the Falcons with a 97 overall rating, with 92 speed and 94 agility to go along with 96 catching, 95 catching in traffic and 98 spectacular catch. Austin Hooper is rated 89 overall at TE with 97 catching while Matt Ryan comes in at 87 overall as Atlanta’s starting QB and Devonta Freeman leads the Falcons’ ground attack with an 85 overall rating with 92 speed and 94 agility. On defense, Grady Jarrett leads the Falcons with a 90 overall rating with 89 strength, 90 block shedding and 93 power move while Deion Jones is the Falcons’ top linebacker at 86 overall with 89 pursuit, 90 speed and 91 acceleration. Keanu Neal and Desmond Trufant lead the Falcons’ secondary at 85 and 84 overall respectively with Trufant logging 92 speed, 93 acceleration and 96 agility.

The Washington Redskins will look to rebound from a 22-12 loss to Minnesota last time out. Washington’s greatest strength comes in the form of their O-line, with Trent Williams leading the way with a 92 overall rating including 95 strength, 92 pass block and 93 run block while Brandon Scherff is 88 overall with 90 run blocking and 92 strength. Jordan Reed leads the Redskins as their top pass-catcher at 84 overall with 87 catching and 87 catching in traffic at TE while Terry McLaurin is at 81 overall at wide receiver and Derrius Guice leads Washington’s ground attack at 80 overall, sharing the ball carrying work with Adrian Peterson who is rated 79 overall. Dwayne Haskins Jr. is the starting QB for Washington despite being rated at just 70 overall. On defense, Matt Ioannidis leads the unit with an 85 overall rating with 86 acceleration and 86 strength to go along with 84 tackling and 89 power moves while Ryan Kerrigan is at 84 overall at outside linebacker with 88 power move, 88 impact blocking and 86 acceleration.

I’ve had a hard time stomaching Atlanta in these sim matchups, but the fact is that they’re simply a better team than the Redskins. Washington’s picked up wins here and there, but they don’t have the difference makers that Atlanta does like Julio Jones and Matt Ryan. I’ll lay the points in a game I see Atlanta winning by a touchdown.