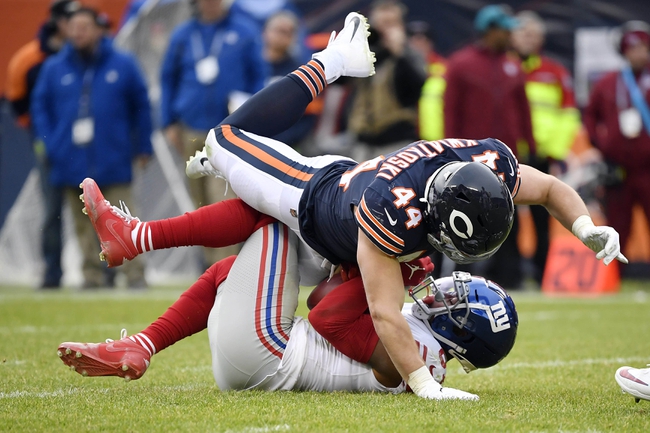 The Chicago Bears and the New York Giants meet in a Madden 20 NFL simulation game on Monday afternoon.

The Chicago Bears will look to build off of a 40-23 win over Tampa Bay in their last sim matchup. Allen Robinson II leads the offense for Da Bears with an 89 overall rating with 90 speed and 93 acceleration as well as 96 catching while Trey Burton is at 82 overall at tight end and Taylor Gabriel is an 81 overall rated wide receiver. Tarik Cohen leads the backfield for Chicago at 78 overall while Mitch Trubisky is still Chicago’s starter under center at 73 overall. On defense, Khalil Mack leads the Bears with a solid 98 overall rating, with 87 speed and 89 acceleration along with 94 tackling, 90 impact blocking, 91 block shedding, 91 finesse move and 95 power move. Eddie Jackson is rated 89 overall at free safety with a 94 grade in zone coverage and 90 acceleration while Kyle Fuller has 92 speed and acceleration at cornerback with 91 zone coverage and Akiem Hicks is at 88 overall at left defensive end with 91 block shedding and 89 power move.

The New York Giants will look to build off of a 48-27 win over the New York Jets in their last simulation game. Saquon Barkley leads the Giants on offense with an 89 overall rating, with 92 speed, 93 acceleration, 96 agility, 94 carrying and 94 juke grades. Evan Engram leads the receiving group for New York at tight end rated 88 overall with 88 catching, 90 speed and 91 acceleration marks. Golden Tate III and Sterling Shepard make up a decent wide receiver pair with each logging 90 speed and 91 acceleration with Tate III having 89 catching compared to Shepard’s 88. On defense, Leonard Williams is the only 80+ overall player on that side of the ball for the Giants at 82 overall with 88 tackling and 88 impact blocking.

The Giants and the points are tempting if we get the same Giants team that beat the crap out of the Jets. The problem is that more often than not, we’ve seen the Giants get pummelled and the problem is that they’re not very good on defense. Chicago beat up on Tampa Bay and are the much better team on defense in this matchup and have some pretty good pieces on offense as well. I think the Bears win this one by at least a touchdown so I’ll lay the points with Chicago here.