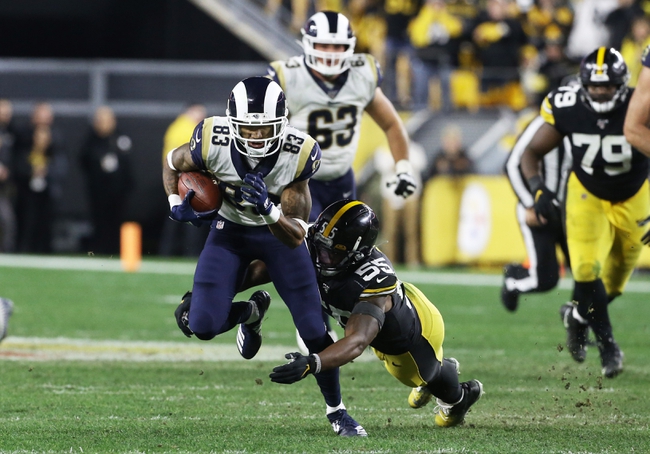 The Los Angeles Rams and the Pittsburgh Steelers meet in a Madden 20 NFL simulation game on Tuesday night.

The Los Angeles Rams will look to build off of a 48-41 win over the Chargers from their last sim appearance. Cooper Kupp leads the Rams’ offense and receiving group with an 87 overall rating with 94 agility and 95 catching while Robert Woods is close behind with an 86 overall mark including 94 catching and Brandin Cooks follows at 85 overall with 95 speed, 92 acceleration and 95 agility. Todd Gurley II leads Los Angeles’ ground attack at 86 overall with 91 speed and 91 acceleration as well as 95 agility and 89 carrying. On D, Aaron Donald is one of the s five highly-touted 99 overall rated players with 90 acceleration, 99 power move, 96 finesse move, 97 block shedding, 93 impact blocking and 92 tackling. Jalen Ramsey leads the Rams’ secondary at 94 overall with 95 man coverage and 95 zone coverage with 92 speed, 93 acceleration and 90 agility.

The Pittsburgh Steelers will try to rebound from a 23-22 loss to Denver in their last sim game. JuJu Smith-Schuster leads the Steelers’ offense at wide receiver with an 86 overall rating, which includes a rating of 91 speed and 92 acceleration as well as 90 catching and 93 catching in traffic while James Conner is the top running back with an 81 overall rating with 86 speed, 89 acceleration and 89 carrying. Ben Roethlisberger is starting QB with an 81 overall rating with 89 throwing power and 89 short passing accuracy. On D, Cameron Heyward leads Pittsburgh rated at 90 overall with 93 strength, 91 tackling and 92 power move while Stephon Tuitt is on the other side of the front at 87 overall with 90 block shedding and 91 strength.

Both of these teams have been disappointing as of late, but while the Steelers have had more downs than ups as of late, they’ve also been the more consistent team over the last month or so in terms of winning games and covering. The Rams continue to be a disappointment just like reality despite winning games here and there and I think this is a game that Pittsburgh wins by a touchdown, so I’ll lay the points with Pittsburgh here.