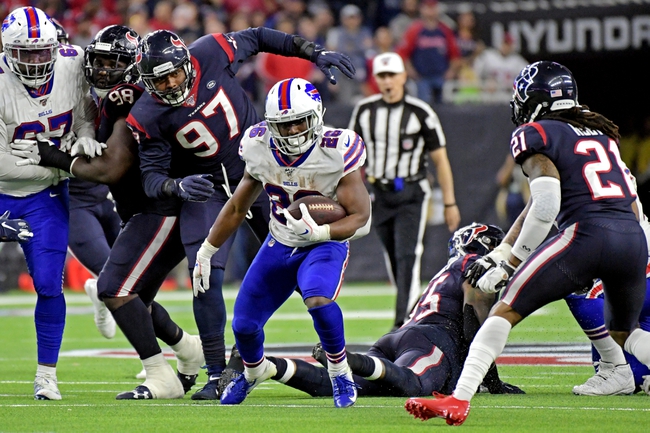 The Buffalo Bills and the Cincinnati Bengals meet in a Madden 20 NFL simulation game on Wednesday afternoon.

The Buffalo Bills will try to rebound from a 23-21 loss to the Detroit Lions in their last sim appearance. Cole Beasley and John Brown lead the Bills on offense at the two wide receiver spots, coming in at 83 overall, with Brown being the speedier of the two in-game with 92 speed and 90 acceleration while Beasley is the more agile and shifty receiver with 92 agility. Frank Gore and Devin Singletary are the tandem at RB for the Bills at 80 overall, while Josh Allen is at 77 overall as the Bills’ starting QB. On defense, the DBs are Buffalo’s greatest asset with Micah Hyde and Tre’Davious White both at 88 overall, with White possessing 91 speed and 93 acceleration at cornerback while Hyde has a 91 zone coverage rating at free safety. Jordan Poyer is 85 overall at strong safety and Lorenzo Alexander is a decent 83 overall at one of the outside linebacker positions.

The Cincinnati Bengals will be out to bounce back after a 21-13 loss to the Jacksonville Jaguars last time out. A.J. Green leads Cincinnati with a 90 overall rating at wide receiver, with 90 speed and 92 agility with 92 catching and 96 marks in catching in traffic and spectacular catch. Joe Mixon starts at running back for the Bengals with an 87 overall rating with 91 speed and 93 acceleration while Tyler Boyd is 83 overall at wide receiver. Andy Dalton is now a cowboy, but here, he’s the starting at QB for the Bengals, but only has a 72 overall rating at the position. On defense, Geno Atkins leads the Cincinnati’s front line at 88 overall with 90 strength, 89 impact blocking and 90 power move. Carlos Dunlap is also at 82 overall on the defensive line while William Jackson leads the secondary at 81 overall.

I’ve said before and I’ll say it again, Buffalo continues to be one of the most disappointing sim teams since we’ve started covering these games, as their solid play in real life just doesn’t translate into the video game. On the other hand, I’ve given the Bengals multiple chances only to watch it blow up in my face pretty much every time. Instead of trying to pick a side in this dumpster fire of a game, I’ll side with the under. I just would not be surprised if this game stays below 45 points, something in the area of 27-19 or something of the like. Give me the under here.

The pick in this article is the opinion of the writer, not a Sports Chat Place site consensus.
Previous Pick
San Francisco 49ers vs. Philadelphia Eagles - 6/9/20 Madden 20 Sim NFL Pick, Odds, and Prediction
Next Pick
NFL News: Update for 6/10/20