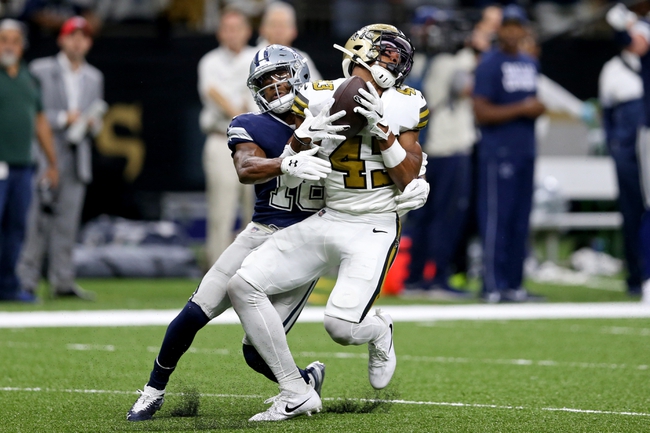 The New Orleans Saints and the Dallas Cowboys meet in a Madden 20 NFL simulation game on Thursday night.

The New Orleans Saints will try to bounce back from a 38-13 loss to Philadelphia in their last sim appearance. Michael Thomas is one of the game’s five heralded 99 overall rated players, with 89 speed, 92 acceleration and 92 agility as well as 99 catching, 98 catching in traffic and 97 spectacular catch with 96 release and 93 jumping. Drew Brees is the Saints’ starting QB at 94 overall with 99 short pass accuracy, 97 medium pass accuracy and 91 deep ball accuracy. Alvin Kamara leads New Orleans in the backfield with an 89 overall rating, including 94 acceleration, 93 agility, 90 carrying and 90 juke while Jared Cook is at 87 overall with 90 acceleration and 85 catching. On D, Cameron Jordan leads the Saints’ pass rush at 92 overall with 92 impact blocking, 89 tackling and 94 finesse move. Demario Davis is at 89 overall at outside linebacker with 90 play recognition and 90 pursuit as well as 86 speed and 89 acceleration. Marcus Williams and Marshon Lattimore also make up a big chunk of the New Orleans secondary at 86 and 85 overall.

The Dallas Cowboys will look to build on a 32-24 win over the Los Angeles Chargers in their last sim game. Ezekiel Elliott leads the Cowboys’ offense, rated 93 overall at running back with 90 speed, 91 acceleration and 95 agility while Amari Cooper leads Dallas’ receiving group at 91 overall with 92 speed, 96 agility and 89 catching. Dak Prescott has an 81 overall rating as starting quarterback with 87 throwing power and 88 short pass accuracy. The Cowboys also have some muscle on their offensive line, with Zack Martin owning a team-high 97 overall rating while Tyron Smith is at left tackle at 91 overall. On the defense, Byron Jones and Demarcus Lawrence lead the Cowboys, each at 88 overall apiece, with Lawrence owning a 93 finesse move rating, 89 power move and 88 block shedding rating while Jones has 92 speed, 94 acceleration and 96 agility to go along with an 84 man coverage rating and 90 zone coverage rating in the Cowboys’ secondary.

Both of these teams can light up the scoreboard in any given game, simulation or not, so I’m surprised to see that this total isn’t in the 60s. Which is why I’m siding with the over. I can easily see both teams scoring 30+ here and as far as a side goes, I think in these coin flip games, it only makes sense to side with the team getting points and even with Dallas against New Orleans, it’s not a bad play. Give me Dallas and the points but my stronger play is on the over.