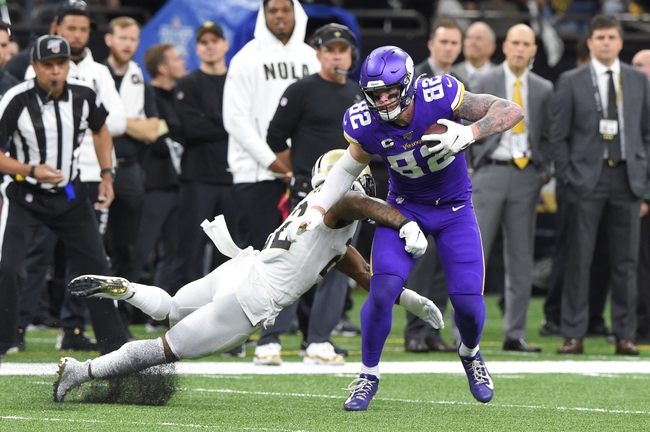 The Indianapolis Colts and the Minnesota Vikings meet in a Madden 20 NFL simulation game on Thursday afternoon.

The Indianapolis Colts will look to build off of a 29-26 win over the Baltimore Ravens in their last simulation appearance. T.Y. Hilton leads Indianapolis on offense with an 88 overall rating, with 93 speed as well as 95 agility and 91 acceleration. Indy also have some solid beef up front with four offensive linemen with at least an 80 overall rating, led by Quenton Nelson who has a team-high 94 overall rating with a 99 awareness rating as well as 97 strength and 92 run blocking. On the defensive end, Justin Houston leads the Colts at 86 overall, including a 93 mark in play recognition while Darius Leonard sits at one of the outside linebacker spots with an 85 overall rating including an 88 rating in tackling.

The Minnesota Vikings will look to build off of a 41-10 win over Jacksonville in their last sim game. Stefon Diggs isn’t with Minnesota anymore, but he’s still with the team in this game with a 93 overall rating with 92 catching, 91 speed, 93 acceleration and 93 agility. Adam Thielen has a 91 overall rating another wide receiver spot with 90 speed and 93 grades in acceleration and agility as well. Thielen also has 95 catching and 90 catching in traffic. Dalvin Cook leads the Vikings’ ground attack at 90 overall with 91 speed, 92 acceleration and 94 agility while Kyle Rudolph is an 84 overall rated tight end and Kirk Cousins is 84 overall at starting QB. On the defensive end, Harrison Smith leads Minnesota at 95 overall with 93 power, 92 zone coverage, 95 play recognition and 93 pursuit. The Vikings have a group of 90 overall rated defenders, with Everson Griffen and Danielle Hunter sitting opposite on the D-line while Eric Kendricks hunkers down the linebacking corps. Linval Joseph also sits at 86 overall in the middle of the defensive line.

The Colts have done a good job in picking up wins over New England and Baltimore, but in all fairness, those are two teams that just haven’t been performing as well in these sim games lately as their team ratings would suggest. Minnesota’s continuing to sort of fly under the radar in these sim games and have put forth some solid efforts more often than not. I’ll lay the points with Minnesota as I see the Vikings winning this one by a touchdown.