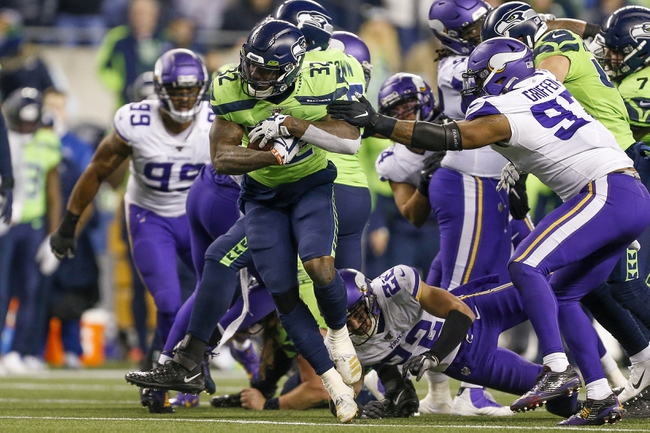 The Minnesota Vikings and the Seattle Seahawks meet in a Madden 20 NFL simulation game on Friday night.

The Minnesota Vikings will look to rebound from a 30-23 win over the Indianapolis Colts in their last sim matchup. Stefon Diggs isn’t a Viking in reality anymore, but he’s still with the team in this game with a 93 overall rating with 92 catching, 91 speed, 93 acceleration and 93 agility. Adam Thielen has a 91 overall rating another wide receiver spot with 90 speed and 93 grades in acceleration and agility as well. Thielen also has 95 catching and 90 catching in traffic. Dalvin Cook leads Minnesota’s ground attack at 90 overall with 91 speed, 92 acceleration and 94 agility while Kyle Rudolph is an 84 overall rated tight end and Kirk Cousins is 84 overall at starting quarterback. On the defensive end, Harrison Smith leads the Vikings at 95 overall with 93 power, 92 zone coverage, 95 play recognition and 93 pursuit. The Vikings have a group of 90 overall rated defenders, with Everson Griffen and Danielle Hunter sitting opposite on the D-line while Eric Kendricks hunkers down the linebacking corps. Linval Joseph also sits at 86 overall in the middle of the defensive line.

The Seattle Seahawks will try to build off of a 13-9 win over Tampa Bay in their last simulation matchup. Russell Wilson leads the Seahawks offense with a solid 97 overall rating with 86 speed, 90 acceleration and 93 agility as well as 91 throwing power and 93 short pass accuracy, 94 medium pass accuracy and 96 deep pass accuracy. Tyler Lockett is Seattle’s top wide receiver with an 88 overall rating including 93 catching, 93 speed, 92 acceleration and 97 agility while Chris Carson also has an 86 rating in leading Seattle’s ground attack with 88 speed, 89 acceleration and 91 stiff arm. On the defensive side, Bobby Wagner is Seattle’s top defender with a 98 overall rating, with 96 tackling, 90 impact blocking, 98 power, as well as high-90s attribute ratings in pursuit and play recognition. Jadeveon Clowney is right behind on the defensive line at 88 overall with 95 pursuit, 91 play recognition, 87 speed and 90 acceleration.

This is a hard one for me to call as both of these teams are ones that I’ve been high on recently over the course of these sim games. With that said, the Vikings just lost to the Colts, while Seattle continues to win games whether it’s a shootout or a defensive battle. I also think that Seattle is just the slightly better team overall side-by-side. I’ll take the points with Seattle and the points as well as putting a bit on Seattle ML.

The pick in this article is the opinion of the writer, not a Sports Chat Place site consensus.
Previous Pick
Indianapolis Colts vs. Houston Texans - 6/12/20 Madden20 NFL Sim Pick, Odds, and Prediction
Next Pick
NFL News: Update for 6/13/20