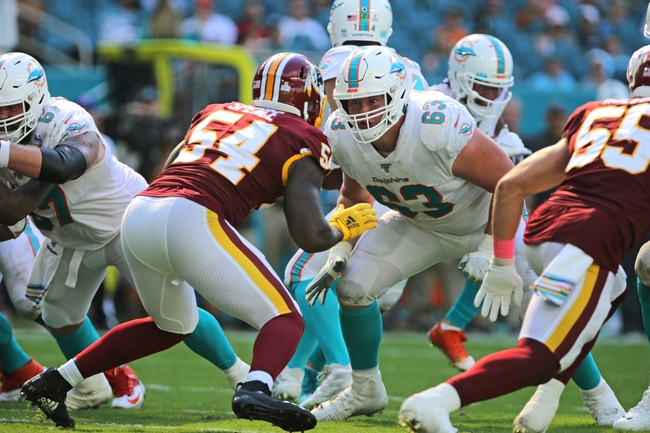 The Miami Dolphins and the Washington Redskins meet in a Madden 20 NFL simulation game on Friday afternoon.

The Miami Dolphins will look to rebound after a 37-14 loss to Jacksonville in their last sim appearance. Devante Parker leads the offense for Miami with an 84 overall rating, including 91 speed and 91 acceleration while Albert Wilson is at 76 overall at another wide receiver spot with 91 speed and acceleration as well. Ryan Fitzpatrick is at starting quarterback for Miami, but only at a 74 overall rating. On the defense, three of Miami’s four 80+ rated overall players are all in the secondary, with Xavien Howard and Aqib Talib at 82 and 81 overall with Howard owning 92 speed and 92 acceleration while Talib has 91 acceleration and 91 agility. Reshad Jones is also at 82 overall at strong safety with 86 speed and 89 acceleration.

The Washington Redskins will try to bounce back from a 44-30 loss to Atlanta in their last sim appearance. Washington’s greatest asset is their O-line, with Trent Williams leading with a 92 overall rating including 95 strength, 92 pass block and 93 run block while Brandon Scherff is 88 overall with 90 run blocking and 92 strength. Jordan Reed leads the ‘Skins as their top receiving threat at 84 overall with 87 catching and 87 catching in traffic while Terry McLaurin is at 81 overall at another wide receiver spot and Derrius Guice leads the Washington backfield at 80 overall, sharing the ball carrier work with Adrian Peterson who is rated 79 overall. Dwayne Haskins Jr. is the starting QB for Washington despite being rated at just 70 overall. On defense, Matt Ioannidis leads the Washington’s D with an 85 overall rating with 86 acceleration and 86 strength to go along with 84 tackling and 89 power moves while Ryan Kerrigan is at 84 overall at outside linebacker with 88 power move, 88 impact blocking and 86 acceleration.

I’ve gone back and forth on this one, and this really isn’t a game I’m looking to wager on. With that said, the Dolphins haven’t done much but disappoint in recent sim games. The same can be said about Washington, but at least we’re seeing the Redskins put points on the board. Between two bad teams, I want the team scoring points for obvious reasons. Give me the Redskins and lay the field goal here.

The pick in this article is the opinion of the writer, not a Sports Chat Place site consensus.
Previous Pick
NFL News: Update for 6/12/20
Next Pick
Carolina Panthers vs. Atlanta Falcons - 6/12/20 Madden20 NFL Sim Pick, Odds, and Prediction