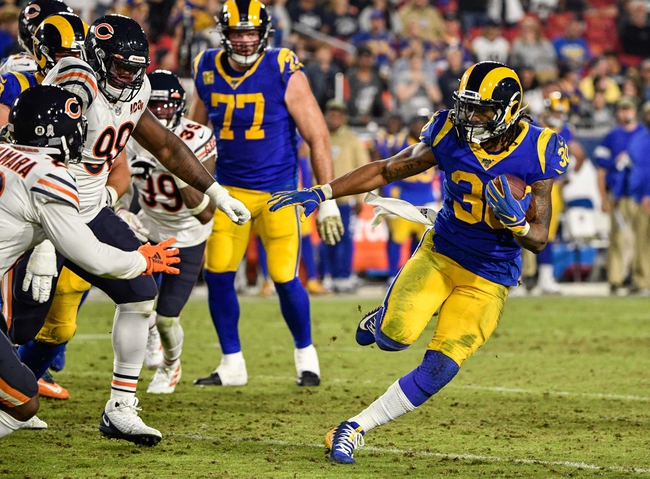 The Los Angeles Rams and the Chicago Bears meet in a Madden 20 NFL simulation game on Saturday afternoon.

The Los Angeles Rams will look to build off of a 39-26 win over the Pittsburgh Steelers in their last simulation game. Cooper Kupp leads the offense for L.A. as well as the receiving group with an 87 overall rating with 94 agility and 95 catching while Robert Woods is not far off of the pace with an 86 overall rating including 94 catching and Brandin Cooks follows at 85 overall with 95 speed, 92 acceleration and 95 agility. Todd Gurley II leads the Rams’ rushing attack at 86 overall with 91 speed and 91 acceleration as well as 95 agility and 89 carrying. On defense, Aaron Donald is one of the s five highly sought after 99 overall rated players with 90 acceleration, 99 power move, 96 finesse move, 97 block shedding, 93 impact blocking and 92 tackling. Jalen Ramsey leads the Rams’ secondary at 94 overall with 95 man coverage and 95 zone coverage with 92 speed, 93 acceleration and 90 agility.

The Chicago Bears will try to bounce back from a 33-26 loss to the Indianapolis Colts last time out. Allen Robinson II leads Chicago on offense with an 89 overall rating with 90 speed and 93 acceleration as well as 96 catching while Trey Burton is at 82 overall at tight end and Taylor Gabriel is on the outside at wide receiver with an 81 overall rating. Tarik Cohen leads the Bears’ ground attack at 78 overall while Mitch Trubisky is still Chicago’s starting QB at 73 overall. On defense, Khalil Mack leads Chicago with a stacked 98 overall rating, with 87 speed and 89 acceleration along with 94 tackling, 90 impact blocking, 91 block shedding, 91 finesse move and 95 power move. Eddie Jackson is rated 89 overall at free safety with a 94 grade in zone coverage and 90 acceleration while Kyle Fuller has 92 speed and acceleration at cornerback with 91 zone coverage and Akiem Hicks is at 88 overall at left defensive end with 91 block shedding and 89 power move.

Once again the Bears are favored and with their defense, I understand why. However, as much as I’ve disliked the Rams over the course of these sim games, they’ve picked it up as of late and have some solid talent on both sides of the ball. I think between two even teams, I want the team playing better and getting points and in both cases here, that’s the Rams.