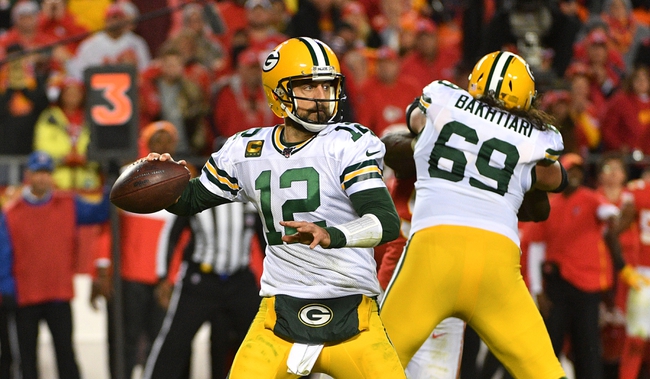 The Green Bay Packers and the Kansas City Chiefs meet in a Madden 20 NFL simulation game on Saturday night.

The Green Bay Packers will try to build on a 56-27 win over the Atlanta Falcons in their last sim appearance. Davante Adams leads the Pack on the offensive end at 94 overall, with 94 catching and 94 catching in traffic while also possessing 89 speed and 92 acceleration. Aaron Rodgers is the starting QB with an 89 overall rating, with 94 throwing power, 90 short pass accuracy and ratings in the high-80s in medium and deep pass accuracy while Aaron Jones leads Green Bay’s ground attack with an 87 overall attribute rating with 93 carrying, 92 juke, 91 speed and 93 acceleration. On defense, Kenny Clark leads Green Bay’s pass rush at 90 overall with 95 strength with 92 block shedding and 89 power moves while Jaire Alexander is not far off at 89 overall to lead the Green Bay secondary at cornerback, with 92 man coverage in addition to 93 ratings in speed and acceleration with 94 agility. Za’Darius Smith and Adrian Amos come in at 88 and 87 overall respectively as well as a pair of key pieces in a stacked Packer defense.

The Kansas City Chiefs will try to rebound from a 37-34 loss to Dallas in their last sim appearance. Patrick Mahomes comes into this one as one of the game’s five players with a 99 overall rating, with 96 throwing power as well as 97 short pass accuracy, 95 medium pass accuracy and 93 deep pass accuracy. Tyreek Hill isn’t far off of the pace at the top of the list at 96 overall, with a 91 attribute rating in catching along with 97 juke, 99 speed, 99 acceleration and 98 agility while Travis Kelce is also at 96 overall as Kansas City’s top TE with attributes of 99 awareness, 85 speed. 91 catching in traffic and 91 catching overall. On defense, Chris Jones and Tyrann Mathieu share the team-high rank on the Chiefs’ group with Jones leading the pass rush at 92 overall with 91 strength, 90 tackling, 89 finesse move and 95 power move while Mathieu anchors KC’s secondary at 92 overall with a 90 man coverage rating as well as 89 in zone coverage while also being rated at 90 speed, and 92 in acceleration and 92 agility.

The points with the Chiefs are tempting, but the problem is that the Chiefs continue to have issues on the defensive side of the ball and are still hard to trust and you never know if the defense is going to hold up enough so that the offense can compensate in the sims. Green Bay on the other hand continue to light it up and are simply playing better right now, so I’ll lay the points with Green Bay in this spot.