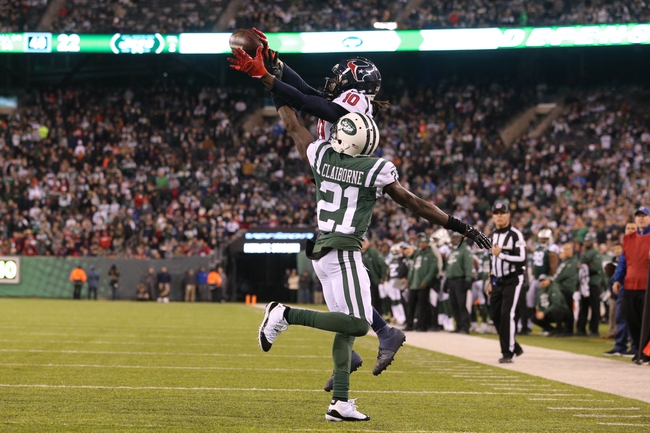 The New York Jets and the Houston Texans meet in a Madden 20 NFL simulation game on Sunday afternoon.

The New York Jets will look to build on a 26-6 win over the Cleveland Browns in their last sim matchup. Le’Veon Bell leads New York’s offense at 88 overall, including 89 speed, 92 acceleration and 95 agility as well as 88 carrying and 91 juke. Robby Anderson leads the Jets’ receiving group at 84 overall with 91 catching while Sam Darnold is rated 74 overall as New York’s starting quarterback. On the D, Jamal Adams leads the Jets with a 92 overall rating, with 95 power and 92 zone coverage as well as 91 speed and 90 acceleration. The Jets also possess a pair of 85 overall rated middle linebackers in C.J. Mosley and Avery Williamson, with both possessing 89 acceleration and Mosley having 91 tackling while Williamson has 86 block shedding.

The Houston Texans will look to build on a 33-23 win over Kansas City in their last sim appearance. . DeAndre Hopkins leads the Texans, rated 98 overall with 98 catching as well as 99 marks in catching in traffic, spectacular catch, release and jumping with 92 speed, 93 acceleration and 92 agility at wide receiver. Deshaun Watson is rated at 86 overall as Houston’s starting QB with 88 acceleration, 84 speed and 89 throw power while Lamar Miller is close behind at 84 overall in the Houston backfield with 91 carrying, 89 juke, 92 speed, 91 agility and 91 acceleration. Defensively, J.J. Watt leads at 97 overall with 97 strength, 94 impact blocking, 97 tackling, 93 finesse move and 94 power move. D.J. Reader and Justin Reid also come in at 84 overall for Houston’s defense with Reader on the defensive line and Reid in the secondary.

Both of these teams have had their fair share of ups and downs, and if we’re being honest, I have a slight problem with Houston being favored as despite the ratings advantage, the Texans have disappointed more often than not. With that said, I’m not sure a side is the wise play in this matchup, I’m going to instead side with the over. I could easily see this game hitting 60 points, something in the area of 34-28 either way, so I’ll take the over as I expect a back and forth game.