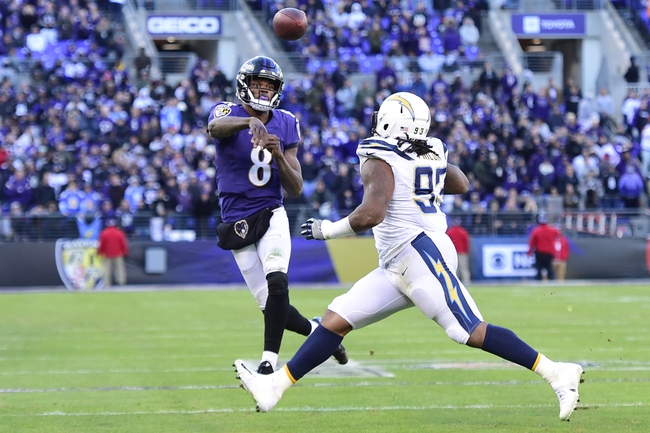 The Baltimore Ravens and the Los Angeles Chargers meet in a Madden 20 NFL simulation matchup on Sunday night.

The Baltimore Ravens come into this game looking to bounce back from a 29-26 loss to the Indianapolis Colts in their last sim matchup. Lamar Jackson leads the Ravens’ offense at QB with a 92 overall rating, with 92 throw power and 92 short pass accuracy to go along with 96 speed, 96 acceleration and 95 agility. Mark Ingram II comes in at 86 overall as Baltimore’s #1 running back with 88 speed, 91 acceleration and 89 carrying while Mark Andrews is not far off at tight end with an 85 overall rating. On defense, Earl Thomas III leads Baltimore with a team-high 93 overall rating, including 92 jumping and 96 zone coverage at free safety and Michael Pierce is a solid 91 overall on the defensive line with 94 block shedding and 90 impact blocking while Marlon Humphrey and Marcus Peters put together a strong cornerback duo at 89 and 85 overall for Baltimore. Humphrey possesses a 90 man coverage rating as well as 92 speed and 93 acceleration while Peters has 87 man coverage, 91 speed and 91 acceleration.

The Los Angeles Chargers will try to rebound from a 32-24 loss to the Dallas Cowboys in their last sim appearance. Keenan Allen leads the Chargers at 92 overall with 90 catching and 94 catching in traffic in addition to 89 speed, 92 acceleration and 92 agility while Hunter Henry is the top tight end for the Chargers at 87 overall with 89 catching as well. Melvin Gordon III and Philip Rivers aren’t on the Chargers in reality anymore, but they’re still on L.A. in this game at 84 overall with Gordon rated at 92 speed and 92 agility with 90 carrying and 90 juke while Rivers has 94 short pass accuracy and 92 medium pass accuracy. On defense, the Chargers are keeping some of their other top-rated players with Joey Bosa leading the defensive front at 91 overall with 90 impact blocking as well as 97 finesse move and 87 strength while Casey Hayward Jr. is at 91 overall in the secondary with 91 acceleration and 92 agility in addition to 89 speed and 90+ ratings in man coverage and zone coverage. Melvin Ingram III and Derwin James Jr. each come in at 88 overall on the defensive end for the Chargers.

I get why the Ravens are favored as a high-rated team, but I genuinely think the Ravens are extremely overrated as well, as we’ve seen Baltimore do nothing but fall flat in these sim games more often than not. The Chargers on the other hand, continue to impress and have been on the right end of multiple outright wins over the last couple of months. I’ll take a shot with the Chargers and the points as well as putting a little bit on the Chargers ML.