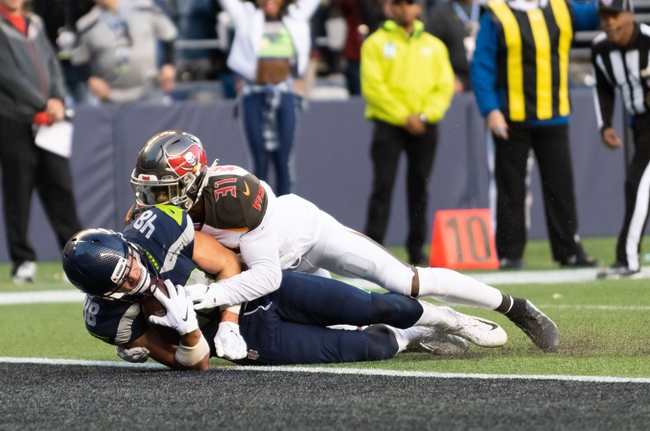 The Tampa Bay Buccaneers and the Seattle Seahawks meet in a Madden 20 NFL simulation game on Thursday afternoon.

The Tampa Bay Buccaneers will look to rebound from a 40-23 loss to the Chicago Bears in their last sim matchup. Mike Evans and Chris Godwin lead Tampa Bay’s offensive unit as well as the receiving group as well with Evans owning a team-leading 92 overall rating with 90 catching, 95 catching in traffic and 97 spectacular catch while Godwin is 87 overall with 97 catching. Jameis Winston comes in at 78 overall at starting quarterback for Tampa Bay in this year’s edition of the game. On the defense, Lavonte David is Tampa Bay’s leading linebacker with a 90 overall rating, with 92 pursuit, 87 block shedding, 88 impact blocking and 89 tackling. Ndamukong Suh is lined up front at 86 overall with 93 impact blocking and Vita Vea is right behind alongside at 85 overall with 91 impact blocking.

The Seattle Seahawks come into this one trying to bounce back from a 33-31 loss to the Green Bay Packers last time out. Russell Wilson leads Seattle’s offense with a solid 97 overall rating with 86 speed, 90 acceleration and 93 agility as well as 91 throwing power and 93 short pass accuracy, 94 medium pass accuracy and 96 deep pass accuracy. Tyler Lockett is the Seahawks’ top wideout with an 88 overall rating including 93 catching, 93 speed, 92 acceleration and 97 agility while Chris Carson also has an 86 rating in leading Seattle’s backfield with 88 speed, 89 acceleration and 91 stiff arm. On the defensive end, Bobby Wagner is Seattle’s top defender with a 98 overall rating, with 96 tackling, 90 impact blocking, 98 power, as well as high-90s attribute ratings in pursuit and play recognition. Jadeveon Clowney is right behind on the d line at 88 overall with 95 pursuit, 91 play recognition, 87 speed and 90 acceleration.

The Bucs and the points are tempting, but the Buccaneers are sliding backwards in these sim games after having a few solid appearances and a loss to a Bears team that I’m not overly high on doesn’t do much for my confidence when it comes to Tampa against a tough Seattle defense. The Seahawks blew an early lead against Green Bay, but I see this one being a different story as Seattle wins this one by double-digits so I’ll lay the points with Seattle in this one.