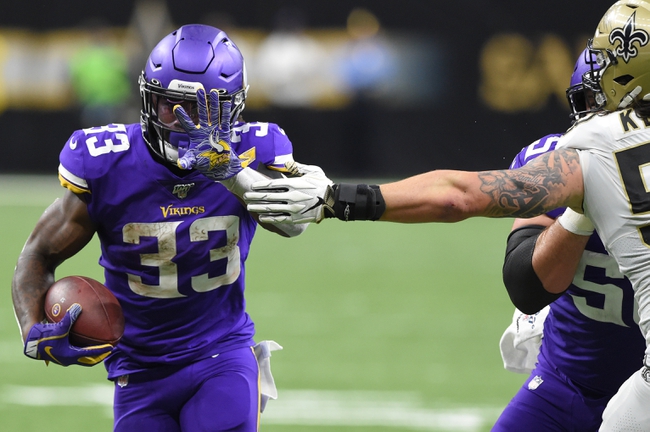 The Minnesota Vikings and the San Francisco 49ers meet in a Madden 20 NFL simulation game on Monday night.

The Minnesota Vikings will look to rebound from a 37-24 loss to the Seattle Seahawks in their last sim appearance. Stefon Diggs isn’t a Viking anymore, but he’s still with Minnesota in this game with a 93 overall rating with 92 catching, 91 speed, 93 acceleration and 93 agility. Adam Thielen has a 91 overall rating at the other wide receiver spot with 90 speed and 93 grades in acceleration and agility as well. Thielen also has 95 catching and 90 catching in traffic. Dalvin Cook leads the Vikings’ ground attack at 90 overall with 91 speed, 92 acceleration and 94 agility while Kyle Rudolph is an 84 overall rated tight end and Kirk Cousins is 84 overall at starting QB. On defense, Harrison Smith leads Minnesota at 95 overall with 93 power, 92 zone coverage, 95 play recognition and 93 pursuit. The Vikings have a group of 90 overall rated defenders, with Everson Griffen and Danielle Hunter sitting opposite on the D-line while Eric Kendricks hunkers down the linebacking corps. Linval Joseph also sits at 86 overall in the middle of the defensive line.

The San Francisco 49ers will look to build off of a 28-23 win over the Pittsburgh Steelers in their last sim appearance. George Kittle leads the 49ers’ offense as a 97 overall rated tight end with 98 catching while Emmanuel Sanders comes in as the top wideout for the 49ers at 89 overall with 94 catching, 92 acceleration and 93 agility. Jimmy Garoppolo is starting at quarterback for the Niners at 84 overall while Tevin Coleman is right behind at running back at 82 overall with 93 speed, 92 acceleration and 93 agility. On the 49ers’ D, Richard Sherman leads the way at 94 overall at CB, with 99 awareness as well as 98 jumping, 90 man coverage and 99 zone coverage. Nick Bosa fronts the 49ers’ pass rush at 89 overall with 91 finesse move and 91 acceleration. The San Francisco defense also has four additional defenders with at least an 85 overall rating, including Arik Armstead, DeForest Buckner, Dee Ford and Fred Warner.

I’ve gone back and forth on this game as I’ve been riding the Vikings quite a bit lately but they’ve cooled down a bit, while the Niners have been inconsistent but I can never really gauge them as it is. Instead, I’m going to side with the over as this just feels like a game that hangs around 60 points, maybe a 33-30 or 34-30 game, so I’ll take the over in this spot.

The pick in this article is the opinion of the writer, not a Sports Chat Place site consensus.
Previous Pick
Baltimore Ravens vs. Dallas Cowboys - 6/15/20 Madden 20 Sim NFL Pick, Odds, and Prediction
Next Pick
NFL News: Update for 6/16/20