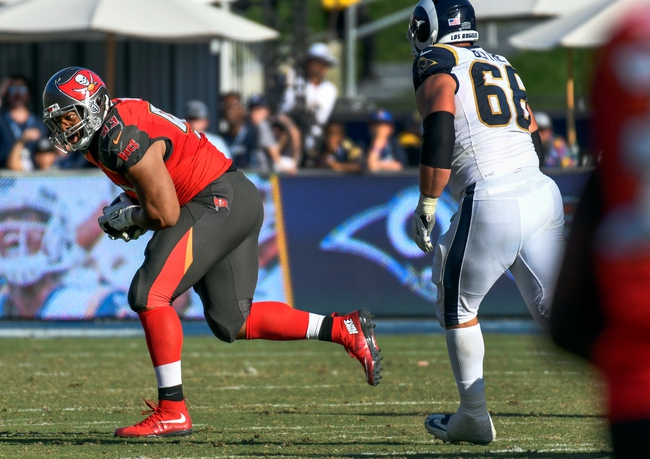 The Los Angeles Rams and the Tampa Bay Buccaneers meet in a Madden 20 NFL simulation game on Tuesday afternoon.

The Los Angeles Rams will look to build off of a 37-27 win over the Chicago Bears in their last sim matchup. Cooper Kupp leads the offense for L.A. as well as the receiving group with an 87 overall rating with 94 agility and 95 catching while Robert Woods is not far off of the pace with an 86 overall rating including 94 catching and Brandin Cooks follows at 85 overall with 95 speed, 92 acceleration and 95 agility. Todd Gurley II leads the Rams’ rushing attack at 86 overall with 91 speed and 91 acceleration as well as 95 agility and 89 carrying. On defense, Aaron Donald is one of the s five highly sought after 99 overall rated players with 90 acceleration, 99 power move, 96 finesse move, 97 block shedding, 93 impact blocking and 92 tackling. Jalen Ramsey leads the Rams’ secondary at 94 overall with 95 man coverage and 95 zone coverage with 92 speed, 93 acceleration and 90 agility.

The Tampa Bay Buccaneers will try to bounce back from a 13-9 loss to Seattle in their last sim matchup. Mike Evans and Chris Godwin lead Tampa Bay’s offense and the receiving group with Evans owning a team-high 92 overall rating with 90 catching, 95 catching in traffic and 97 spectacular catch while Godwin is 87 overall with 97 catching. Jameis Winston comes in at 78 overall under center for Tampa Bay in this year’s Madden. On defense, Lavonte David is Tampa Bay’s leading linebacker with a 90 overall rating, with 92 pursuit, 87 block shedding, 88 impact blocking and 89 tackling. Ndamukong Suh is up front at 86 overall with 93 impact blocking and Vita Vea is right behind alongside at 85 overall with 91 impact blocking.

I considered the over here as I could easily see this game breaking 60 points. However, while Tampa Bay has shown up here and there and Los Angeles has fallen short multiple times, we’ve seen the Rams step it up in these sim games as of late and given what we’ve seen so far, the Rams should be able to win this game by at least a field goal. I just trust them right now more than I do Tampa Bay, so I’ll lay the points with the Rams in this one.