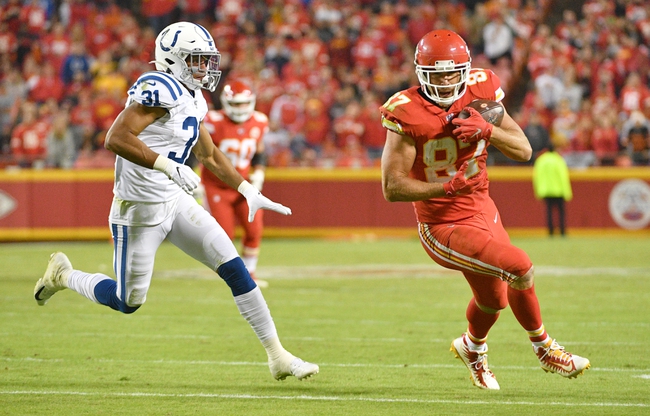 The Kansas City Chiefs and the Indianapolis Colts meet in a Madden 20 NFL simulation game on Wednesday night.

The Kansas City Chiefs will try to rebound from a 40-34 loss to the Green Bay Packers in their last sim matchup. Patrick Mahomes comes into this one as one of the game’s five heralded 99 overall rated players, with 96 throwing power as well as 97 short pass accuracy, 95 medium pass accuracy and 93 deep pass accuracy. Tyreek Hill isn’t far off of the pace at the top at 96 overall, with a 91 attribute rating in catching along with 97 juke, 99 speed, 99 acceleration and 98 agility while Travis Kelce is also at 96 overall as Kansas City’s top tight end with attributes of 99 awareness, 85 speed. 91 catching in traffic and 91 catching overall. On defense, Chris Jones and Tyrann Mathieu share the team-high rank on the Chiefs’ unit with Jones leading the pass rush at 92 overall with 91 strength, 90 tackling, 89 finesse move and 95 power move while Mathieu anchors KC’s secondary at 92 overall with a 90 man coverage rating as well as 89 in zone coverage while also being rated at 90 speed, and 92 in acceleration and 92 agility.

The Indianapolis Colts on the other hand, will try to build off of a 33-26 win over the Chicago Bears in their last sim game. T.Y. Hilton leads Indy on offense with an 88 overall rating, with 93 speed as well as 95 agility and 91 acceleration at wide receiver. The Colts also have some strength up front with four offensive linemen with at least an 80 overall rating, led by Quenton Nelson who has a team-high 94 overall rating with a 99 awareness rating as well as 97 strength and 92 run blocking. On the defensive end, Justin Houston leads Indianapolis at 86 overall, including a 93 mark in play recognition while Darius Leonard sits at one of the outside linebacker spots with an 85 overall rating including an 88 rating in tackling.

I get the Chiefs being favored here, as they are the better team with better rated players. However, the Chiefs continue to have issues defensively in these sim games, and the Colts have been no stranger to pulling off upsets in the underdog role as of late. I know these simulations are coin flips, but we’ve seen enough of a sample size to suggest that the Colts have a decent chance here. I’ll take a shot with Indianapolis and the points as well as sprinkle a bit on Indianapolis ML.