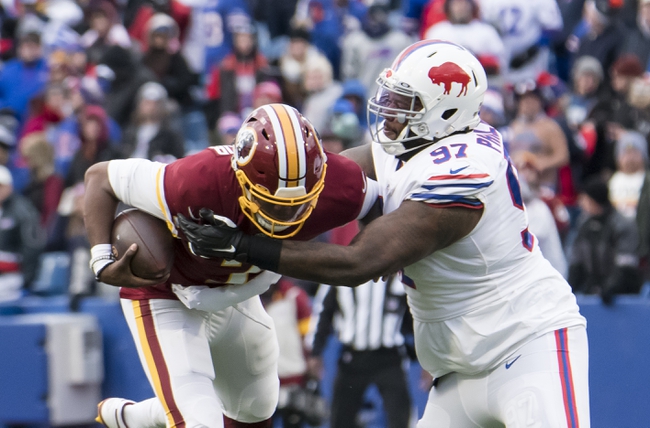 The Buffalo Bills and the Washington Redskins meet in a Madden 20 NFL simulation game on Wednesday afternoon.

The Buffalo Bills will try to bounce back from a 56-17 loss to the Cincinnati Bengals in their last sim appearance. Cole Beasley and John Brown lead Buffalo’s offense at the two wide receiver spots, coming in at 83 overall, with Brown being the faster of the two in-game with 92 speed and 90 acceleration while Beasley is the more shifty receiver with 92 agility. Frank Gore and Devin Singletary are the top duo at RB for the Bills at 80 overall, while Josh Allen is at 77 overall as the Bills’ starting pivot. On defense, the secondary is Buffalo’s greatest strength with Micah Hyde and Tre’Davious White both at 88 overall, with White possessing 91 speed and 93 acceleration at cornerback while Hyde has a 91 zone coverage rating at free safety. Jordan Poyer is 85 overall at strong safety and Lorenzo Alexander is a decent 83 overall at one of the outside linebacker positions.

The Washington Redskins will try to build off of a 37-10 win over the Miami Dolphins in their last sim appearance. The Redskins’ greatest asset is their offensive line, with Trent Williams leading with a 92 overall rating including 95 strength, 92 pass block and 93 run block while Brandon Scherff is 88 overall with 90 run blocking and 92 strength. Jordan Reed leads the Redskins as their top pass-catcher at 84 overall with 87 catching and 87 catching in traffic while Terry McLaurin is at 81 overall at another wide receiver spot and Derrius Guice leads the Washington backfield at 80 overall, sharing the ball carrier work with Adrian Peterson who is rated at a 79 overall. Dwayne Haskins Jr. is the starting QB for Washington despite being rated at just 70 overall. On D, Matt Ioannidis leads the unit with an 85 overall rating with 86 acceleration and 86 strength to go along with 84 tackling and 89 power moves while Ryan Kerrigan is at 84 overall at outside linebacker with 88 power move, 88 impact blocking and 86 acceleration.

I get Buffalo being favored, but I don’t think any team’s disappointed me more than any in these sim games since we started covering them. Washington’s had their ups and downs as well, but my expectations were low to begin with. Even in a pick ‘em though, I can’t pick a side here. Instead, I’m going to side with the under as I don’t see this game breaking 50 points. I see it being somewhere in the 24-19 range regardless of the side, so I’ll take the under in this spot.

The pick in this article is the opinion of the writer, not a Sports Chat Place site consensus.
Previous Pick
NFL News: Update for 6/17/20
Next Pick
Denver Broncos vs. Dallas Cowboys - 6/17/20 Madden20 NFL Sim Pick, Odds, and Prediction