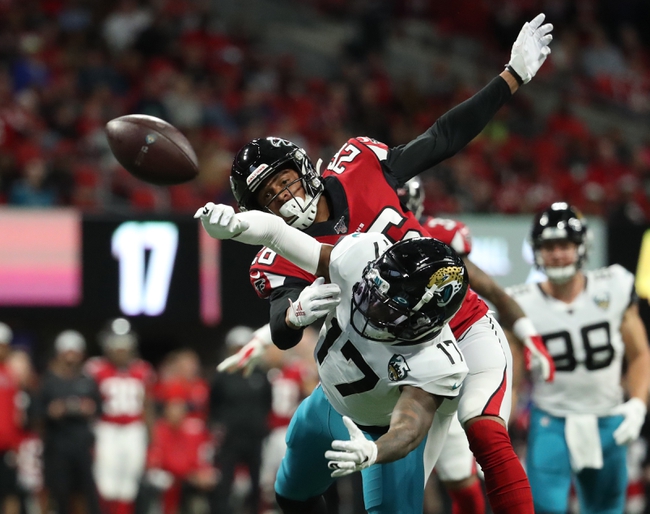 The Jacksonville Jaguars and the Atlanta Falcons meet in a Madden 20 NFL simulation game on Thursday afternoon.

The Jacksonville Jaguars will look to rebound from a 34-31 loss to New England in their last sim matchup. Leonard Fournette leads the jags on offense with an 83 overall rating with 92 speed and 96 carrying. D.J. Chark Jr. sits at 81 overall at wide receiver with 91 catching as well. On defense for Jacksonville, each level of the Jaguars’ defense has a player rated at 84 overall, with A.J. Bouye anchoring the secondary, Telvin Smith in the linebacking corps and Yannick Ngakoue up front in the trenches. Bouye owns an 89 speed rating with 94 acceleration and 91 agility while Smith has 87 speed with 89 acceleration and 88 agility.

The Atlanta Falcons on the other hand, will look to rebound from a 27-20 loss to the Chicago Bears in their last simulation game. Julio Jones leads the Dirty Birds with a 97 overall rating, with 92 speed and 94 agility to go along with 96 catching, 95 catching in traffic and 98 spectacular catch. Austin Hooper’s rated 89 overall at tight end with 97 catching while Matt Ryan comes in at 87 overall as Atlanta’s starting QB and Devonta Freeman leads the Falcons’ ground attack with an 85 overall rating with 92 speed and 94 agility. On defense, Grady Jarrett leads the Falcons with a 90 overall rating with 89 strength, 90 block shedding and 93 power move while Deion Jones is the Falcons’ top linebacker at 86 overall with 89 pursuit, 90 speed and 91 acceleration. Keanu Neal and Desmond Trufant lead the Falcons’ secondary at 85 and 84 overall respectively with Trufant logging 92 speed, 93 acceleration and 96 agility.

Part of me wants to take a stab with Jacksonville and the points given how well the Jags did against New England, but the Patriots haven’t been covering much to begin with. Atlanta has had their ups and downs, but Atlanta has some solid offensive players and the ability to put points up in a hurry. I’ll lay the points with Atlanta in this one.