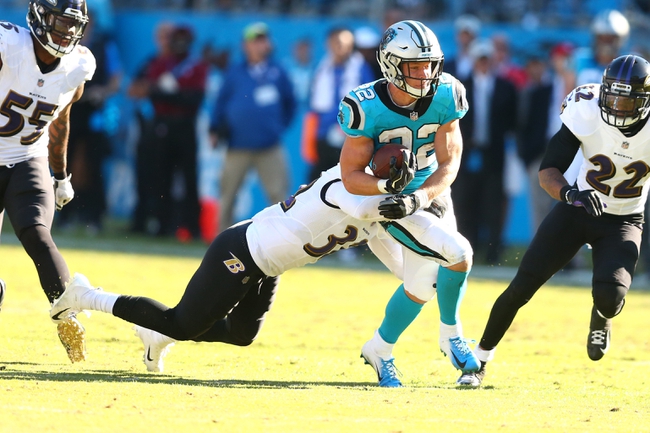 The Carolina Panthers and the Baltimore Ravens meet in a Madden 20 NFL simulation matchup on Thursday night.

The Carolina Panthers will try to rebound from a 46-40 loss to the Denver Broncos in their last sim appearance. Carolina is in one of the most enviable spots in this year’s Madden as the only team with two of the game’s five 99 overall rated players, and they have one on each side of the ball. Christian McCaffrey leads the Panthers’ offense with 92 speed, 93 acceleration and 97 agility as well as 98 carrying and 96 juke. Greg Olsen is 88 overall at tight end with 93 catching and 93 catching in traffic while D.J. Moore comes in at 85 overall with 93 speed and acceleration and 81 catching at wide receiver. Cam Newton may finally be healthy in the game, but his overall rating is still down to 79 yet he still remains the starting QB for Carolina. On defense, Luke Kuechly holds onto the other 99 rating at linebacker, with 90 jumping, 91 impact blocking and 99 tackling as well as 99 play recognition and 96 pursuit. After Kuechly, Gerald McCoy and Kawann Short anchor the defensive line at 85 and 84 overall, with both possessing strength and impact blocking ratings in the low-90s.

The Baltimore Ravens will try to rebound from a 38-22 loss to the Dallas Cowboys in their last sim appearance. Lamar Jackson leads Baltimore’s offense at quarterback with a 92 overall rating, with 92 throw power and 92 short pass accuracy to go along with 96 speed, 96 acceleration and 95 agility. Mark Ingram II comes in at 86 overall as Baltimore’s top running back with 88 speed, 91 acceleration and 89 carrying while Mark Andrews is not far behind at tight end with an 85 overall rating. On defense, Earl Thomas III leads the Ravens with a team-high 93 overall rating, including 92 jumping and 96 zone coverage at free safety and Michael Pierce is a solid 91 overall on the defensive line with 94 block shedding and 90 impact blocking while Marlon Humphrey and Marcus Peters put together a strong cornerback duo at 89 and 85 overall for Baltimore. Humphrey possesses a 90 man coverage rating as well as 92 speed and 93 acceleration while Peters has 87 man coverage, 91 speed and 91 acceleration.

The Ravens continue to be favored in these spots, but the problem I have is that Baltimore continues to get these favorite lines, but they continue to not only not cover these lines, but a lot of times they’re actually losing the games outright. I’ll take a shot that that continues here, so I’ll take Carolina and the points as well as putting a bit on the Panthers on the moneyline as well.