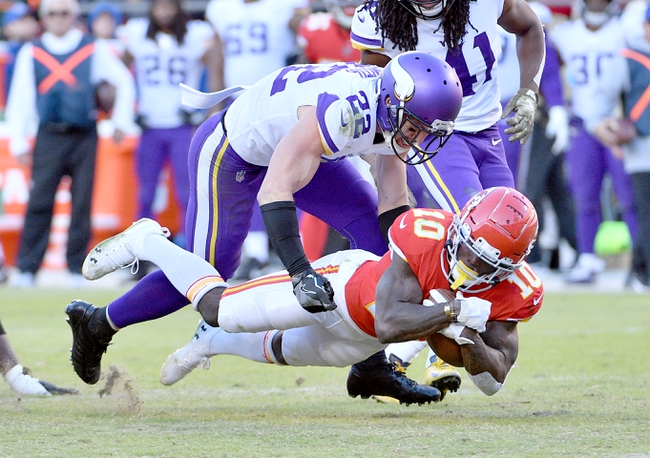 The Kansas City Chiefs and the Minnesota Vikings meet in a Madden 20 NFL simulation game on Friday night.

The Kansas City Chiefs come into this one looking to build on a 55-52 win over Indianapolis in their last sim matchup. Patrick Mahomes comes into this one as one of the game’s five highly-regarded 99 overall rated players, with 96 throwing power as well as 97 short pass accuracy, 95 medium pass accuracy and 93 deep pass accuracy. Tyreek Hill isn’t far off at 96 overall, with a 91 attribute rating in catching along with 97 juke, 99 speed, 99 acceleration and 98 agility. Travis Kelce is also at 96 overall as Kansas City’s top tight end with attributes of 99 awareness, 85 speed. 91 catching in traffic and 91 catching overall. On defense, Chris Jones and Tyrann Mathieu share the team-high on the Chiefs’ unit with Jones leading the pass rush at 92 overall with 91 strength, 90 tackling, 89 finesse move and 95 power move while Mathieu anchors KC’s secondary at 92 overall with a 90 man coverage rating as well as 89 in zone coverage while also being rated at 90 speed, and 92 in acceleration and 92 agility.

The Minnesota Vikings will try to build off of a 31-28 win over the San Francisco 49ers in their last sim matchup. Stefon Diggs isn’t a Viking in real life anymore, but he’s still with the team in this game with a 93 overall rating with 92 catching, 91 speed, 93 acceleration and 93 agility. Adam Thielen has a 91 overall rating another wide receiver spot with 90 speed and 93 grades in acceleration and agility as well. Thielen also has 95 catching and 90 catching in traffic. Dalvin Cook leads the Vikings’ rushing attack at 90 overall with 91 speed, 92 acceleration and 94 agility while Kyle Rudolph is an 84 overall rated tight end and Kirk Cousins is 84 overall at starting QB. On the defensive end, Harrison Smith leads Minnesota at 95 overall with 93 power, 92 zone coverage, 95 play recognition and 93 pursuit. The Vikings have a group of 90 overall rated defenders, with Everson Griffen and Danielle Hunter sitting opposite on the D-line while Eric Kendricks hunkers down the linebacking corps. Linval Joseph also sits at 86 overall in the middle of the defensive line.

I get why the Chiefs and points would be tempting against Minnesota, especially in reality. However, in these sim games, the Chiefs’ defense continues to be a liability, as even in victory, like the one against the Colts, we saw KC give up 52 points. I’m not sure Minnesota registers in the 50s, but they’re the better  defensive team and have pieces that match up on offense, so I’ll side with Minnesota and lay the points in this one.