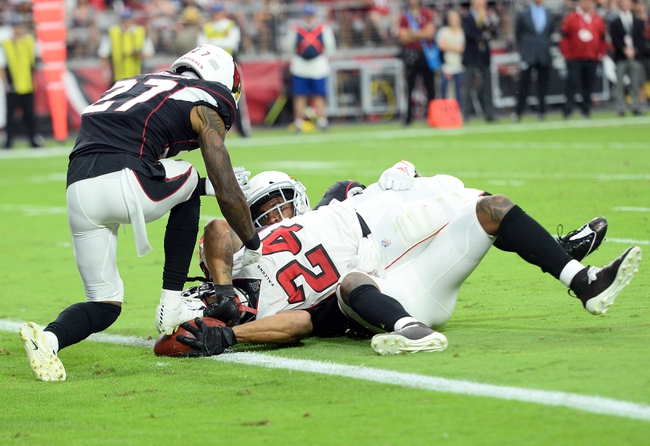 The Atlanta Falcons and the Arizona Cardinals meet in a Madden 20 NFL simulation game on Friday night.

The Atlanta Falcons will try to rebound after a 23-20 loss to Jacksonville in their last sim appearance. Julio Jones leads Atlanta with a 97 overall rating, with 92 speed and 94 agility to go along with 96 catching, 95 catching in traffic and 98 spectacular catch. Austin Hooper’s rated 89 overall at tight end with 97 catching while Matt Ryan comes in at 87 overall at starting QB and Devonta Freeman leads the Falcons’ rushing attack with an 85 overall rating with 92 speed and 94 agility. On defense, Grady Jarrett leads the Falcons, rated 90 overall with 89 strength, 90 block shedding and 93 power move while Deion Jones is the Falcons’ top linebacker at 86 overall with 89 pursuit, 90 speed and 91 acceleration. Keanu Neal and Desmond Trufant lead the Falcons’ secondary at 85 and 84 overall respectively with Trufant logging 92 speed, 93 acceleration and 96 agility.

The Arizona Cardinals on the other hand, will try to build off of a 24-19 win over the New York Giants in their last sim appearance. Larry Fitzgerald leads the Cardinals’ offense at 83 overall at wide receiver with a 93 catch rating and 91 catching in traffic while Kenyan Drake sits at 81 overall in the Arizona’s backfield with 91 speed, 89 acceleration, 90 agility and 87 carrying grades. Kyler Murray is Arizona’s starting quarterback at 75 overall with 91 speed, 92 acceleration and 90 agility as well as 89 throwing power. On defense, Chandler Jones leads the Cards with a 90 overall rating, including 92 power move and an 86 tackle rating while Patrick Peterson is at 92 overall with 92 speed, 92 acceleration, 95 agility and 89 man coverage at cornerback.

I’m done trying to figure out the Falcons as when I back them, they rarely come through, and when I don’t, they pull off the incredible. With that said, the Cardinals haven’t been the same team that were playing close games against everyone and pulling off outright wins here and there, but I think the Cards have a chance here. I’ll side with Arizona and the points in this one.