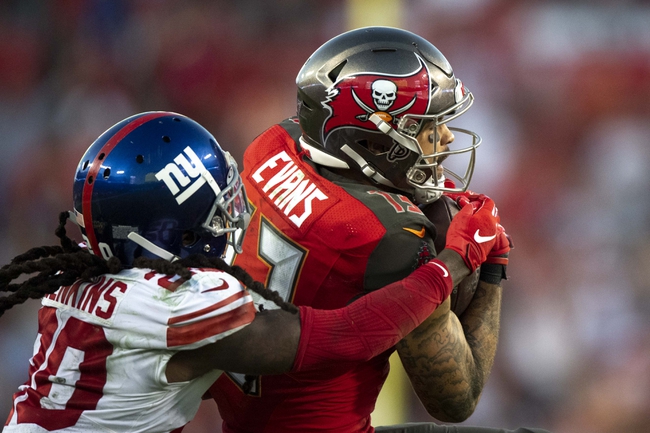 The Tampa Bay Buccaneers and the New York Giants meet in a Madden 20 NFL simulation game on Saturday afternoon.

The Tampa Bay Buccaneers will try to rebound from a 36-24 loss to the Los Angeles Rams in their last sim appearance. Mike Evans and Chris Godwin lead Tampa Bay on offense as the top receiving duo on the team with Evans owning a team-high 92 overall rating with 90 catching, 95 catching in traffic and 97 spectacular catch while Godwin is 87 overall with 97 catching. Jameis Winston comes in at 78 overall at starting QB for Tampa Bay in this year’s edition of Madden. On the Bucs’ defense, Lavonte David is the leading linebacker with a 90 overall rating, with 92 pursuit, 87 block shedding, 88 impact blocking and 89 tackling. Ndamukong Suh is lined up front at 86 overall with 93 impact blocking and Vita Vea is right behind alongside at 85 overall with 91 impact blocking.

The New York Giants will also try to bounce back after a 24-19 loss to the Arizona Cardinals last time up. Saquon Barkley leads the G-Men on offense with an 89 overall rating, with 92 speed, 93 acceleration, 96 agility, 94 carrying and 94 juke grades. Evan Engram leads the Giants’ receiving group at tight end at 88 overall with 88 catching, 90 speed and 91 acceleration marks. Golden Tate III and Sterling Shepard make up a solid wide receiver pair with each logging 90 speed and 91 acceleration with Tate III having 89 catching compared to Shepard’s 88. On defense, Leonard Williams is the only 80+ overall player on that side of the ball for the Giants at 82 overall with 88 tackling and 88 impact blocking.

The Buccaneers didn’t look all that great against the Rams, so the points are tempting on the surface. But then you remember the Giants are the Giants, and that means they’re not a good football team in the game or in real life. I just have no faith in New York outside of Barkley and Engram and like we say on the live show, we don’t want any part of computer generated Daniel Jones. I’ll lay the points with Tampa Bay by default.

The pick in this article is the opinion of the writer, not a Sports Chat Place site consensus.
Previous Pick
NFL News: Update for 6/20/20
Next Pick
Tennessee Titans vs. New England Patriots - 6/20/20 Madden20 NFL Sim Pick, Odds, and Prediction