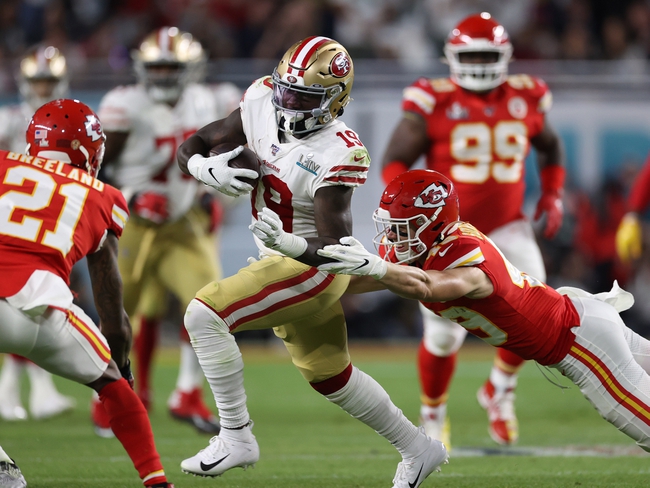 The Dallas Cowboys and the San Francisco 49ers meet in a Madden 20 NFL sim matchup on Sunday night.

The Dallas Cowboys will look to build on a 31-29 win over the Houston Texans in their last sim appearance. Ezekiel Elliott leads Dallas on offense, rated 93 overall at running back with 90 speed, 91 acceleration and 95 agility while Amari Cooper leads the Cowboys’ receiving group at 91 overall with 92 speed, 96 agility and 89 catching. Dak Prescott has an 81 overall rating as starting QB with 87 throwing power and 88 short pass accuracy. The Cowboys also have some girth on their offensive line, with Zack Martin sporting a team-high 97 overall rating while Tyron Smith is at left tackle at 91 overall. On the defensive side, Byron Jones and Demarcus Lawrence lead the Cowboys, each at 88 overall apiece, with Lawrence owning a 93 finesse move rating, 89 power move and 88 block shedding rating while Jones has 92 speed, 94 acceleration and 96 agility to go along with an 84 man coverage rating and 90 zone coverage rating in the Cowboys’ secondary.

The San Francisco 49ers will look to rebound from a 31-28 loss to Minnesota in their last sim matchup. George Kittle leads the offense for the Niners as a 97 overall rated tight end with 98 catching while Emmanuel Sanders comes in as the top wide receiver for the 49ers at 89 overall with 94 catching, 92 acceleration and 93 agility. Jimmy Garoppolo is starting QB for San Francisco at 84 overall while Tevin Coleman is right behind at running back at 82 overall with 93 speed, 92 acceleration and 93 agility. On defense, Richard Sherman leads San Francisco at 94 overall at cornerback, with 99 awareness as well as 98 jumping, 90 man coverage and 99 zone coverage. Nick Bosa leads the 49ers’ pass rush at 89 overall with 91 finesse move and 91 acceleration. The San Francisco defense also has four additional defenders with at least an 85 overall rating, including Arik Armstead, DeForest Buckner, Dee Ford and Fred Warner.

This should be a great game even for a sim matchup as you have two stacked offenses and solid defenses, the problem for me is that I’m having an issue picking a side between two teams that can put points on the board in a hurry. Instead of trying to pick a side here, I’m going to side with the over as I could easily see this game hitting 60 points by the end of the 3rd quarter.

The pick in this article is the opinion of the writer, not a Sports Chat Place site consensus.
Previous Pick
New England Patriots vs. Green Bay Packers - 6/22/20 Madden 20 Sim NFL Pick, Odds, and Prediction
Next Pick
NFL News: Update for 6/22/20