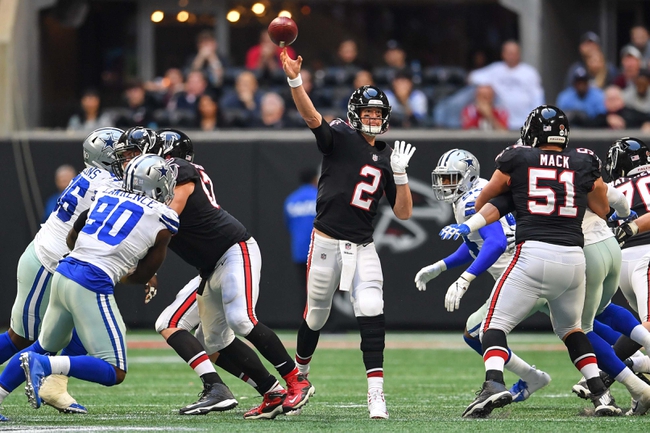 The Dallas Cowboys and the Atlanta Falcons meet in a Madden 20 NFL simulation game on Monday night.

The Dallas Cowboys will look to build off of a 47-26 win over San Francisco in their last sim appearance. Ezekiel Elliott leads the Dallas offense, rated 93 overall at running back with 90 speed, 91 acceleration and 95 agility while Amari Cooper leads the Cowboys’ receiving group at 91 overall with 92 speed, 96 agility and 89 catching. Dak Prescott has an 81 overall rating as starting QB with 87 throwing power and 88 short pass accuracy. The Cowboys also have some size on their offensive line, with Zack Martin owning a team-high 97 overall rating while Tyron Smith is at left tackle at 91 overall. On the D, Byron Jones and Demarcus Lawrence lead the Cowboys, each at 88 overall apiece, with Lawrence owning a 93 finesse move rating, 89 power move and 88 block shedding rating while Jones has 92 speed, 94 acceleration and 96 agility to go along with an 84 man coverage rating and 90 zone coverage rating in the Cowboys’ secondary.

The Atlanta Falcons on the other hand, could use a bounce back after a 21-13 loss to Arizona in their last game. Julio Jones tops Atlanta with a 97 overall rating, with 92 speed and 94 agility to go along with 96 catching, 95 catching in traffic and 98 spectacular catch. Austin Hooper is rated 89 overall at tight end with 97 catching while Matt Ryan comes in at 87 overall as Atlanta’s starting quarterback and Devonta Freeman leads the ground attack for Atlanta with an 85 overall rating with 92 speed and 94 agility. On defense, Grady Jarrett leads the Falcons with a 90 overall rating with 89 strength, 90 block shedding and 93 power move while Deion Jones is the Falcons’ top linebacker at 86 overall with 89 pursuit, 90 speed and 91 acceleration. Keanu Neal and Desmond Trufant lead the Falcons’ secondary at 85 and 84 overall respectively with Trufant logging 92 speed, 93 acceleration and 96 agility.

The Falcons are a really frustrating team, both in reality and in these sim games, but for this aspect, they’re frustrating because they have a solid rated offense and a decent defense and can only put up 13 points against Arizona. Not to mention the Falcons have been having more down days than good ones as of late. Dallas picked up a big win over San Francisco and bottom line is the Cowboys are easier to trust offensively right now. I’ll lay the points with Dallas here.