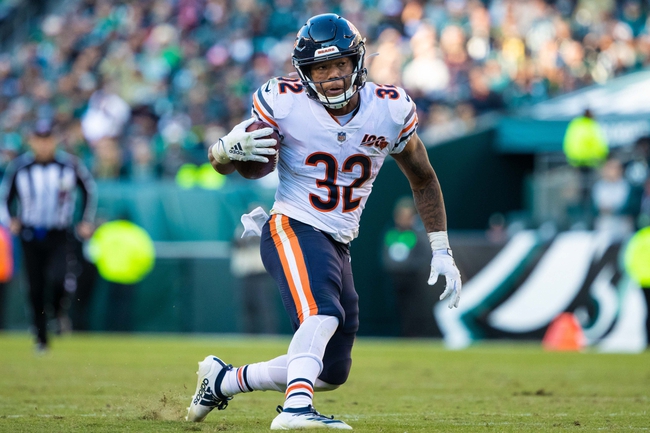 The Chicago Bears and the Buffalo Bills meet in a Madden 20 NFL simulation game on Monday afternoon.

The Chicago Bears come into this game looking to build off of a 27-20 win over the Atlanta Falcons in their last sim appearance. Allen Robinson II leads the Bears offensively with an 89 overall rating with 90 speed and 93 acceleration as well as 96 catching while Trey Burton is at 82 overall at tight end and Taylor Gabriel is on the other side at wide receiver with an 81 overall rating. Tarik Cohen leads the Bears’ ground attack at 78 overall while Mitch Trubisky is still the Bears’ starting QB at 73 overall. On D, Khalil Mack leads Chicago with a stacked 98 overall rating, with 87 speed and 89 acceleration along with 94 tackling, 90 impact blocking, 91 block shedding, 91 finesse move and 95 power move. Eddie Jackson is rated 89 overall at free safety with a 94 grade in zone coverage and 90 acceleration while Kyle Fuller has 92 speed and acceleration at cornerback with 91 zone coverage and Akiem Hicks is at 88 overall at left defensive end with 91 block shedding and 89 power move.

The Buffalo Bills will be try to take another step after a 24-10 win over Washington last time out. Cole Beasley and John Brown lead the Bills’ offense at the two wide receiver slots, coming in at 83 overall, with Brown being the faster of the two in-game with 92 speed and 90 acceleration while Beasley is the more shifty receiver with 92 agility. Frank Gore and Devin Singletary are the lead tandem at RB for the Bills at 80 overall, while Josh Allen is at 77 overall as the Bills’ starting quarterback. On defense, the secondary is Buffalo’s greatest asset with Micah Hyde and Tre’Davious White both at 88 overall, with White possessing 91 speed and 93 acceleration at cornerback while Hyde has a 91 zone coverage rating at free safety. Jordan Poyer is 85 overall at strong safety and Lorenzo Alexander is a decent 83 overall at one of the outside linebacker positions.

This is my dream game and I say that with a huge amount of sarcasm as these are two teams I’ve been exceptionally down on since we started covering these sim games. With that said, the Bears are just the better team side by side, especially on the defensive side, and I just like Chicago more than I do Buffalo in this spot. I’ll lay the points with the Bears even if it’s more of a fade from Buffalo than anything else.